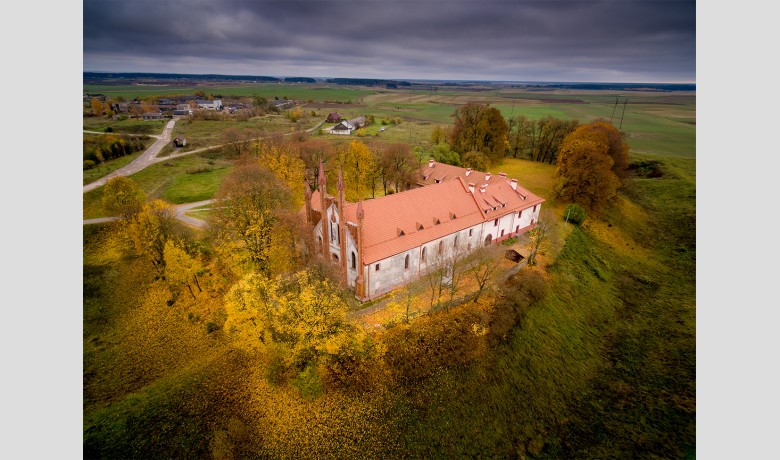 By the beginning of the 15th century, Senieji Trakai Castle had lost its defensive role, because Naujieji Trakai Island Castle (today simply called Trakai Island Castle) was already built and gained the status of the primary defensive castle. Thus, Vytautas the Great invited Benedictine brothers from Tyniec, a town not far from Krokow (today territory of Poland) to his native castle.

The duke built them a wooden church and allocated them a dessiatin (ed. Old Russian measurement) of land along with two lakes. The monastery operated until the mid-19th century when it was closed by the administration of the Russian empire.

The monks practiced a contemplative way of life, dedicated a lot of time to prayer, meditation, and other spiritual practices. They taught in the estates they were assigned to. Alongside the abbey, they founded a parish elementary school.

Benedictines were educated, and they paid special attention to education – this is confirmed by the fact that at the end of the 18th century there were even 769 books in the monastery’s library. According to historical data a book cost 8 gold coins, while some of them cost as much as 30 gold coins.

The monastery was rebuilt numerous times, because its wooden construction began to decay and was once even destroyed by fire. A new masonry monastery building was erected in its place in the 18thcentury. But after some time, the monastery was closed, and Benedictine brothers relocated to Nesvizh.

Senieji Trakai monastery that was given the name of Annunciation is now occupied by the congregation of the Sisters of Saint John. The nuns opened a retreat house in the restored medieval castle and invite believers to participate in Catholic religious recollection and meditation practices. The Sisters also organise other religious events, take care of local youth, and once even housed participants of a bard festival.

Monday are ‘desert’ (retreat) days for the Apostolic Sisters of Saint John. It is a day of total solitude and prayer. The monastery is open on all the other days. Masses are celebrated, and adoration of the Blessed Sacrament takes place.