Church of St. John the Baptist in Paluknys 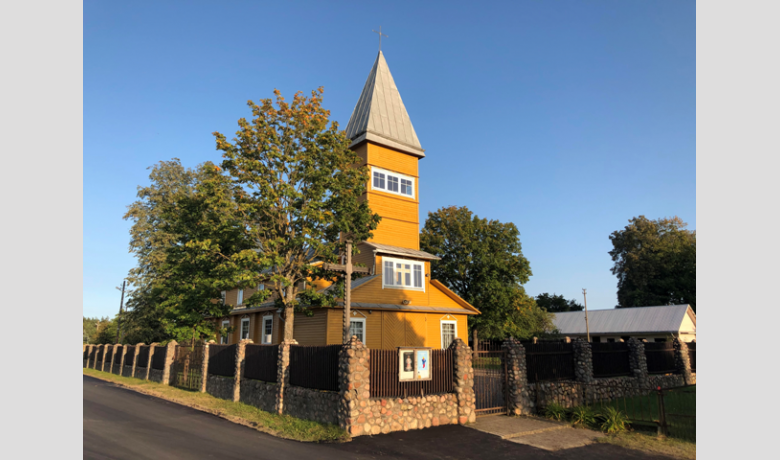 Paluknys is an old village located on the banks of the Lukna stream, from which the name of the village is believed to have originated.

A chapel was built here in 1794. In 1829, Jonas Volfgangas, the owner of Paluknys manor and a professor at Vilnius University, built a new wooden chapel. In 1904, with the permission of the authorities, Mykolas Sadovskis donated the Paluknys family chapel, other buildings and 2 tenths of land to the Vilnius diocese. In 1905, a temporary church was moved here from the Old Trakai. The chapel was repaired and enlarged in 1906.

The parish was founded in 1921, and Paluknys chapel became a church. In 1926, towers were added to the church. However, the church burned down on 25 August 1941. Kazimieras Packevičius (1884–1941), who was the pastor of the church since 1915, died during the fire. A temporary church was built in 1943. In 1981 it was reconstructed: extended, widened, with an addition of a tower. The church has a rectangular layout, basilica style, an entrance hall and a single tower. Inside of the church there are 3 naves separated by pillars, and three altars.

The Church of St. John the Baptist, which has an elongated rectangular layout and three naves, stands in the middle of Paluknys, next to the abandoned Volfgangas family cemetery. The cemetery contains state-protected art monuments: two 18th century chasubles and a wooden sculpture Pensive Christ. Pensive Christ dates back to the second half of the 17th century and is known as the oldest sculpture of this iconographic type in Lithuania. The professional skills of its author suggest that the figure of the Pensive Christ could have been carved by a master associated with the environment of the Vilnius Bernardine Monastery. The Bernardines of Vilnius owned a chapel in the town of Paluknys and the sculpture may have been transferred from this particular chapel to the present church.