Church of the Holy Heart of Jesus in Rūdiškės 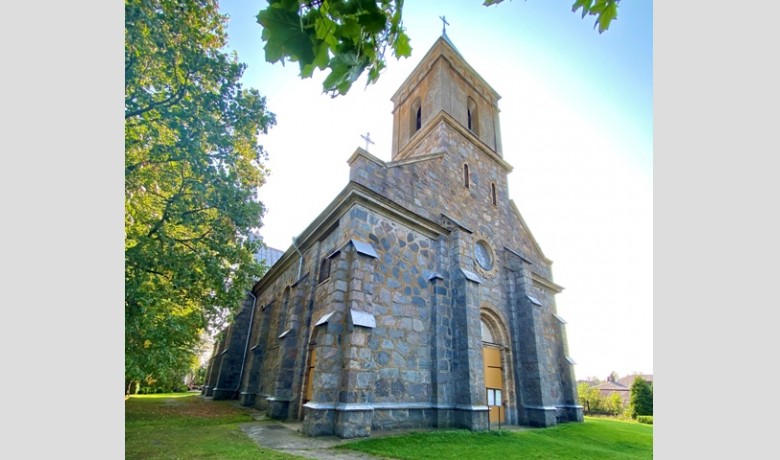 The village of Rūdiškės has been mentioned since 1774, and, after the construction of the Warsaw-Petersburg railway, it began to rapidly grow since 1864. In ancient times, this was an extremely swampy place. It is believed that bog iron ore was melted in the vicinity of the settlement, which is why it was named Rūdiškės (‘rūda’ means ore in Lithuanian).

In 1908, the government allowed the construction of the Church of the Holy Heart of Jesus, a branch of Trakai Parish. In the first half of the 20th century, the Holy Heart of Jesus became the most popular subject in Lithuanian ecclesiastical art. Piety was inspired by the visions of St. Margaret Mary Alacoque: in 1674, the nun saw a flaming wounded heart of Christ with a cross at the top, surrounded by a crown of thorns symbolizing the suffering caused by the sins of men. Paintings of Jesus and devotion to the Holy Heart have spread based on the image drawn by the saint, particularly after the beatification of Margaret Mary Alacoque in the 19th century and her canonization in 1920.

Priest A. Žemaitis, appointed to Rūdiškės in 1909, installed an altar in a residential house and began to hold services there. The parish was founded in 1910 and has grown significantly over the century. The first records of the parish show that there were four hundred parishioners in it. Today this number has increased to four thousand.

Priest J. Jurkevičius and his parishioners built the present brick church in 1925–1932. In 1980, it was repaired. The church is historic, has neo-Romanesque and neo-Gothic features, a Latin cross plan, a single tower, and an interior of three naves. The churchyard is bricked.