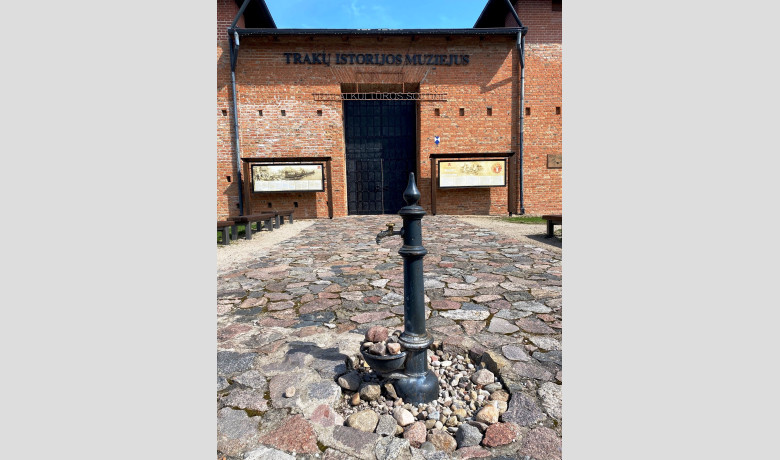 Following a resolution of the Commonwealth Sejm in 1768 in 1779 the Dominicans began building a three-nave church with two towers on the main western front on both sides of the southern defensive ditch in the first yard of the Peninsula Castle. It was 46 m long and 28 m wide. When building the church they tore down the bricks of the castle gate tower and some of them were used for the foundations. The main entrance stood on the other side of the castle moat, that is in the town while the chancel stood in the castle yard.

Work on building the church was begun by the architect Augustyn Kossakowski and continued by Marcin Knakfus. Construction work was halted as money ran out and in 1812 it was stopped by the war against Napoleon. Work resumed around 1820. Because of a shortage of money reconstruction started in 1823-26 and the southern nave was used to build the two-storey cellared friary and part of the north-west nave was used for the chapel which was consecrated on Aug. 4 1822 in honour of St Michael the Archangel. The central nave of the incomplete church was used as the friary yard. Both buildings had two-slope roofs. A wooden turret was built on top of one of the incomplete towers as a bell tower. Reconstruction work was devised by Prior L. Glowicki. In the castle yard was a friary storehouse, ice house, wooden steward’s office, a stables and barn. The friary had three gardens.

The friary complex comprised two two-storey quadrangular buildings. The church walls were 2.6-3.2 m thick and made of brick that was laid in renaissance style. Very large bricks were used (30-31 cm long x 15 wide x 7.2-7.5 cm high. Old wall paintings survive in the chapel – the side altars and a frieze were painted. The high altar and cross recorded in an inventory do not survive. The walls were painted with narrative depictions and this and the decorative friezes and panels have survived in the southern wing of the friary.

The friary buildings are not of any clear style, the facades are flat and plastered, the sole decorative elements are the profile cornices above the second floor and the pillars on the yard façade by the entrance door.

On June 16 1864 the tsar’s governor general ordered the closing down of the friary. A gentry protection agency was housed in the southern corpus while the other became home to the Trakai police cells, an archive and the home of guards and civil servants. A park was laid out in the friary territory in the mid-nineteenth century.

After World War One only the southern corpus was used and a store was built in the chapel. The abandoned eastern building began to decay.

Work began restoring the friary around 1960. At first only fragmentary preservation work was carried out. After work done in 1988-99 the buildings have been used for the Trakai History Museum administration. Work continues and at present the wall paintings in the chapel are being restored and there are plans to open an ecclesiastical art exhibition here.

Work is being done here according to the Trakai Island and Peninsula Castles Reserve directed maintenance and use programme as approved by the Lithuanian minister of culture in 2000. the building belongs to the Republic of Lithuania.