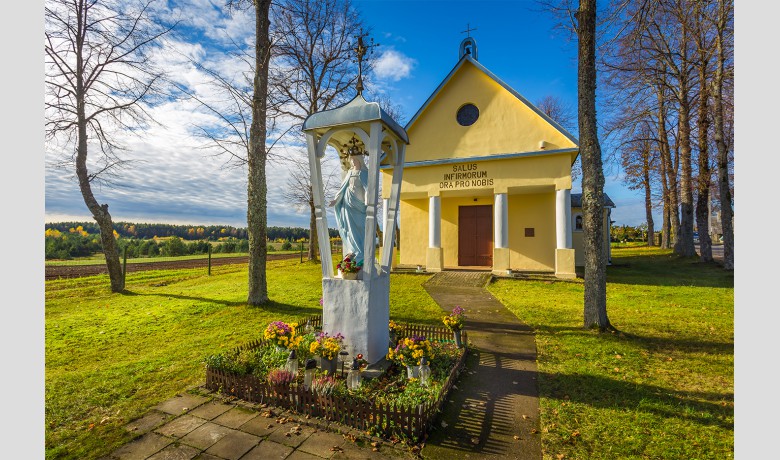 Gojus village with its community of 30 people can be found by the northern side of Ropėjai forests in Rūdiškės eldership in Trakai district. The name of this lovely village, nestled next to Lake Meduvis, means small forest or a grove. Not only is the village lovely but the surrounding area, known as Ilgutis Botanical Reserve, is also lovely as well.

The construction of the heart of Gojus village – Blessed Virgin Mary Chapel of Patient Health (or Mother of God Chapel of Patient Health) began in 1936. Chapel relics signify a special meaning and are revered as religious objects and create an exclusive atmosphere. The most important is the Mother of God Patient Health picture, famous because of the miraculous powers attributed to it, a monstrance made of bullets, and a 200-page manuscript of Gojus village and chapel history.

Today the chapel, situated not far from the Vilnius-Druskininkai road, belongs to the parish of Paluknio St. John the Baptist. Masses are celebrated here on Sundays. People say that in the area surrounding Gojus chapel one can feel a special vibration of the soul and the breath of God’s grace, which incites us to believe in God’s mercy and care. Upon entering the chapel the faithful encounter the statue of Mary the Immaculate Conception.

In addition to Gojus chapel, there is the children’s foster home founded by the monastery of Saint John’s congregation. One can visit an original clay house along with the first and only operating Japanese kiln in Lithuania – anagama. Anagama pottery workshops are organised here during the summer, when the kiln is fired up and participants work using an ancient technique.

The history of Gojus village began in 1865, when the owner of Apatiškiai manor, Russian General Reklickis decided to sell his forests, a total of about 100 hectares. The forests were sold separately while most of the lands were bought by the Andžejevskiai brothers and other families. That was how the village community started to develop.

In 1881 the second son Aleksandras was born into the family of one of the Andžejevskiai brothers. It was his idea several decades later to build a chapel in the village. When he was 19-years old, Aleksandras lost his parents. Soon after he left for Senieji Trakai, where he began learning the basics of the faith. Later he arrived at Bronifratai (Brothers Hospitallers of Saint John of God) monastery in Cracow. Aleksandras Andžejevskis, who later became a monk and received the name of Vlodimiežas, for a long time lived in Prague, Vienna, and Rome. Although often out of country, he regularly visited his homeland.

In 1936, in his father’s native Gojus village Vlodimiežas began construction of the Josephine-style chapel that he had designed. The construction of a small chapel 2-metres wide and 3-metres long and high took one year to complete. However, soon after a project to expand the chapel commenced. In 1939, the foundation of the chapel was consecrated and a plaque commemorating this is inlaid in the wall of the main altar of the chapel.

At the time Gojus chapel had a choir, young people were taught the basics of the faith and educational activities took place here. Children planted 22 linden trees around the chapel and promised to care for them. The trees grow here to this day.

Pilgrims come to Gojus Blessed Virgin Mary Chapel of Patient Health not only to pray, but also to examine relics that are kept here. One of the chapel’s treasures is the Mother of God Patient Health picture. It is a copy of a 1936 image that was painted by Romualdas Varachovskis and is kept in Vilnius Bonifratrai Holy Cross monastery (now Mary Immaculate Sisters of the Poor monastery). In Lithuania there are total of 30 pictures that are declared holy!

The Mother of God Patient Healthpicture attracts visitors because of its miraculous powers and God’s graces. The first vote (latin word votummeans a wish, gift, promise) was attached to it three years after it was brought to the chapel – this was how a woman gave thanks for the miraculous cure that was confirmed by a special Church commission. Beginning the same year, 1940, and on the last Sunday of August ever since Gojus chapel hosts an annual Mother of God Patient Health celebration.

Gojus chapel has an exclusive reliquary – a monstrance, made of bullets taken from the bodies of Austrian Prussian, and Russian soldiers! The monstrance is one of the most important and magnificent liturgical vessels used in the Catholic church where the Holy Sacrament is respectfully kept during Masses and processions. This church vessel is usually made of precious metals, thus honouring the body of Christ.

This is the story of the famous monstrance. During WW I Fr Vlodimiežas (real name Aleksandras Andžejevskis) was working in Bonifratrai monastery hospital, which was then a war hospital. Injured soldiers from Austrian, Prussian, French, and Russian regiments were being brought in. The clergyman began collecting bullets taken out during treatment. Later a special 36-centimetre high monstrance was made of 88 bullets.

A 200-page manuscript ‘Mother of God Patient Health Chapel Chronicle is kept in the chapel of Gojus village. It details the genesis of the village, circumstances concerning the building of the chapel, and has valuable information about liturgical utensils and so on.

One of the more interesting chapel relics is the 17th– century clock. It has his father’s words written on it: ‘Any of these hours could be your last’.