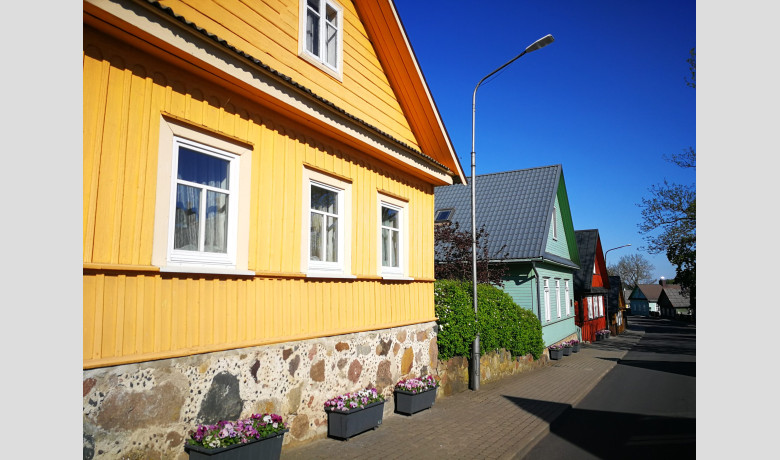 The town of Trakai has long been known for the harmonious coexistence of various ethnic and religious groups. This still echoes today as you take a walk around the town reflecting the presence of different architectural traditions. It is one of the greatest distinctive features that make Trakai so unique.

Another characteristic that attracts tourists to Trakai is its Karaite community. It is an undoubtedly unique Turkic ethnic group who adheres to a distinct branch of Judaism. It is believed that the Karaite religious doctrine emerged in the 13th century in Mesopotamia. The Karaite community has preserved their religious beliefs, customs, traditions, and, most importantly, their language, throughout the centuries of their history in Trakai. For this reason, people sometimes describe Trakai as the Karaite capital of Lithuania and of the world.

It all started in around 1398 when Vytautas, the Grand Duke of Lithuania, brought some 380 families belonging to this ethnic group to Trakai after his victorious battle in Crimea in the 14th century. After settling in Trakai, the Karaite community formed two distinct groups – warriors and civilians. The warriors protected the castles and the bridge leading to Trakai Island Castle. Interestingly, some of the civilian Karaites served as clerks and translators for the grand duke.

However, a greater part of the civilian Karaites cultivated land, grew vegetables, engaged in small crafts and trade, ran inns, chartered state customs and engaged in other important activities, such as acting as intermediaries in cases where the Grand Duchy of Lithuania wanted to ransom the captives held by the Turks.

Over time, the Karaites earned trust from Vytautas the Great and other rulers of Lithuania. The rulers, in turn, granted certain privileges to the Karaite community as a gesture of gratitude. One of such privileges was the Magdeburg right (the right of self-government). A surviving record of 1441 testifies to this fact. These privileges granted to the Karaites by Lithuanian ruler Kazimieras Jogailaitis created a unique situation in the history of Lithuanian town governance: Two separate, mutually independent communities governed under the Magdeburg right existed in Trakai for several centuries.

One of them was the Karaite residential area of the town called the Small Town (Mažasis miestas). Under this privilege, it was treated as an autonomous town with its own official stamp and treasury. Here, the Karaites could build their own house of worship to practice their religion called Karaism. Karaism is a word that has a deep and interesting meaning as it comes from the Semitic word karą meaning “to read”, “to read aloud” or “to study” the Bible – the Old Testament, to be its adherent or follower. The Karaites diligently adhered to their cultural practices, traditions and customs.

During that period, the Karaites’ street looked very different than it looks today. It stretched across the highest ridge of the hill through the centre. It was flanked on both sides by the Karaite farmsteads located next to each other. A residential building stood adjacent to the street with outbuildings located behind it, and behind them, gardens stretched all the way to the lake. The gardens located along the lake made the landscape across the lake look very open and empty, and only the residential houses sitting on the highest point of the landscape were visible.

The Karaites’ street visitors can now explore the only exposition in the European Union providing an insight into the culture of this ethnic group. It is home to the Karaite house of worship called kenesa, the oldest one in Lithuania and one of just three existing Karaite houses of worship in the world that the residents and visitors of Trakai can admire on any given day.

All of the Karaite houses share one unique feature harking back to the period of their construction. It is still visible to this day. Each traditional Karaite house has three windows overlooking the street. Legend has it that following the Battle of Žalgiris, Lithuanian Grand Duke Vytautas decided to reward all the foreigners who fought on his side and helped him achieve the victory. The Tatars had already been allowed to settle in Vilnius and to build a mosque in Lukiškės Square in Vilnius.

Then it was the Karaites’ turn to be rewarded. A grey-haired old Karaite man approached Vytautas.

“Long may you reign, our wise and righteous lord!”

“Thank you for your kind words, my loyal foreign ally,” the ruler said to him. “Now it’s your turn to ask for a reward on behalf of your nation for your loyalty and bravery. I will do what is within my power to make your wishes come true.”

“I know, my Lord, that this victory was very hard and it will take a long time for our wounds to heal. I will not ask for gold, silver or land, as you have already rewarded us. I would like to make one request, though. Could you please grant us permission to build new houses in the Small Town so that each of them has three windows overlooking the street?”

Vytautas was surprised at receiving such an unusual request. He then asked the old man:

“And you risked your lives for this?”

“No, my Lord,” the old man replied. “Not for this. We risked our lives for the sake of peace because a bad peace is better than a good war. And our request would mean that everyone who sees a house with three windows knows that God is worshipped in that house, that we are always loyal to the Grand Duke and that guests are always welcome at this house.”

Vytautas liked what he heard, and, as a gesture of gratitude for their loyalty, gave exclusive permission to the Karaites to build houses in Trakai with three windows.