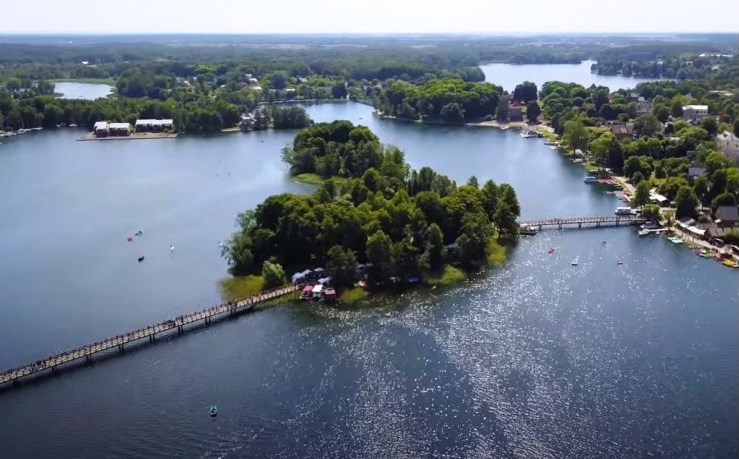 There is an island near Trakai Island Castle called Karvinė, Karaimka or Kopūstinė which is connected to the town and the castle by the bridges. This location has as many as three different names due to the unique stories behind them. For example, the first name, Karvinė, suggests that the fields on the islands were used as pasture where the Karaites used to graze their cattle. The residents of that period regularly witnessed a unique sighting of cows and horses swimming across the lake and goats being carried in boats to the island.

The second name, Karaimka, is a reminder of the fact that the Karaite warriors used to stand there guarding Trakai Island Castle during the reign of Vytautas the Great. This suggests that this island served as a sort of outpost for the castle. However, we have no knowledge about any buildings that existed on the island. The only known fact is that a manor house that stood in this island was purchased by Ivanas Sapiega in 1520. The latter also owned Bažnytėlė Island located nearby.

The third name, Kopūstinė (Lith. Cabbage), originated from the fact that the Karaites, known for their excellent gardening skills, also grew cabbage in this island. Since the Karaites had a knack for growing vegetables, they often used vegetables in their cuisine. They were particularly fond of cabbage and they used it as an ingredient in various Karaite dishes. For example, finely chopped fresh cabbage is added to kibinas to make this dish juicier. And it is a well-known fact that kibinas (kybyn or plural kybynlar in the Karaim language; kibinai in Lithuanian) is one of the most famous dishes in Karaite culture and the whole world.

Besides kibinas, Karaite cuisine is also known for fresh cabbage soup, sauerkraut soup, cakes, cabbage cakes, stews, salads and, of course, kiubėtė – a greasy pastry dough pie with filling. The kiubėtė filling is usually made from fish or minced meat with vegetables. The top of the cake can be enjoyed with broth, and the rest can be eaten as a second course. Beef or mutton, seasoned with vegetables and herbs, are commonly used for the meat filling. But you will not find pork in the Karaite cuisine because the Karaites do not eat it.

Also, there are many potato dishes in the Karaite cuisine such as biok, a Karaite version of kugelis. The dish is baked in a similar way to the Lithuanian kugelis, except that fatty beef or lamb cut into small pieces is added to the grated potato mass.

In fact, Lithuanian and Karaite cuisines have a number of similarities: in our culture it is popular to eat cepelinas, meanwhile Karaites eat kopta (grated potato dumplings). To prepare kopta, you need to cook a thick soup using beef or lamb bones and adding pearl barley and beans or a lot of carrots. When the soup is almost finished cooking, grate some raw potatoes, add finely chopped lamb or beef to the grated potato mass, shape it into dumplings and pour them into the soup. The cooked soup is placed in the oven to simmer.

One of them is about the fortress of Chufut-Kale near Bakhchysarai, from which the first Karaites came to Lithuania. Legend has it that when the fortress was surrounded by an enemy, the townspeople decided not to fight with guns but with hospitality. The hostesses prepared a lot of food, and the elders opened the gates leading to the fortress and invited the weary and hungry enemy inside. The enemy’s soldiers realized that they could not attack a nation that met them not with a weapon but with bread and salt.

Besides the Karaite hospitality, there are also legends of the delicacy of their dishes. Legend has it that a Muslim clergyman who tasted a Karaite stew was so astonished by the deliciousness of the dish that he was lost for words. This is how the name of the eggplant and tomato stew, imam baildy, came to be. In Lithuanian, this means something like “an imam in awe”.

It is worth mentioning that every summer, in August, the Kopūstinė Island hosts the Kopūstinė Fair and the Feast of the Assumption of the Virgin Mary. The Kopūstinė Fair breathes new life into the old festive traditions which attract a great deal of interest from visitors from Lithuania and abroad. During the celebration, participants and guests are treated to Gaspadinės Kopūstienė (Hostess Cabbage Soup).