Lentvaris Church of the Annunciation 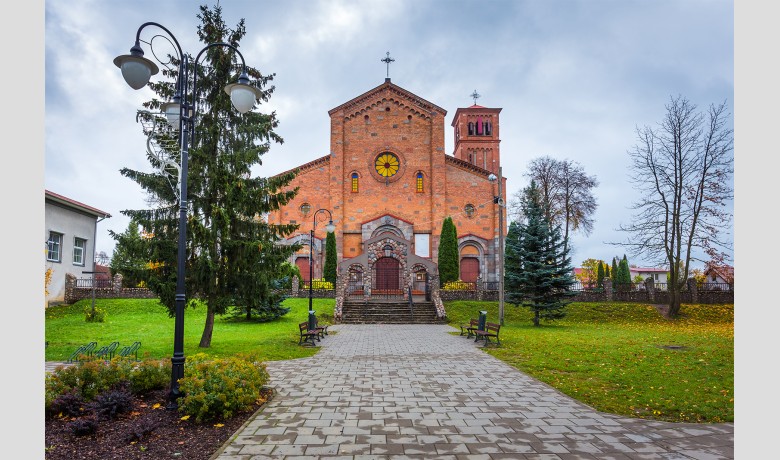 Lentvaris, located half way between Vilnius and Trakai, is famous for its unique natural beauty, a magnificent English-style castle-like manor standing on the peninsula of an artificial lake, and a Neo-Romanesque building of rare beauty, the massive red-brick church of the Annunciation of the Blessed Virgin Mary.

Count Tyszkiewicz, who owned the manor in the 19th century, started the construction of the church. It is claimed that Italian culture and art were very close to his heart. Therefore, it is not surprising that Lentvaris Church architecture was inspired by the 15thcentury Santa Maria delle Grazie (St. Mary the Gracious) Church in Milan and Leonardo da Vinci’s famous mural painting The Last Supper.

Count Tyszkiewicz believed that The Last Supperwas the key to understanding the life philosophy of this genius artist. Lentvaris Church of the Annunciation of the Blessed Virgin Mary is a testament of respect to Leonardo da Vinci.

The church’s décor deserves special attention. Its walls are covered with murals and decorated using a special sgraffito technique. Notably, the church’s decoration works took place in the midst of World War II, when all the required décor materials were of strategic importance and could only be used for military purposes. The archives of the Artists’ Union confirm that at the time each tube of paint was distributed according to a list.

Lentvaris Church of the Annunciation of the Blessed Virgin Mary belongs to Trakai Parish. Every day sacred masses are celebrated in the Lithuanian and Polish languages. In addition, on the first Monday of every month, a Requiem Mass is held in Latin.

Building of the Church

At the end of the 19th century, Count Tyszkiewicz and residents of Lentvaris County asked the authorities for a permit to build a church as local practicing Catholics had to travel to other churches located in settlements at least 10 km away. Unfortunately, at the time the requests were denied. Thus, it was not surprising that in 1905, when the permit was finally granted, Lentvaris residents built a wooden barrack in a record 10 days, in which to celebrate masses temporarily.

Construction of the real church was funded mainly by the Tyszkiewicz family, but donations were accepted in other ways as well. The Golden Book of Donations details the input of various private individuals and institutions. Additional funds were gathered through the sales of candles, commemorative church postcards, etc. Interestingly, the Catholic Society in the US organised special lotteries, sales and events aimed at collecting more funds for the church.

Lentvaris Church of the Annunciation of the Blessed Virgin Mary was designed in the Neo-Romanesque style, which was especially popular in Europe at the time. It was to be built on land donated by Countess Tyszkiewicz. As typical of Neo-Romanesque architecture, Lentvaris Church is characterised by its massiveness, half-circle arches and windows.

Design decisions inspired by the church in Milan can be easily explained.  Trying to avoid the tsarist oppression, Count Tyszkiewicz spent a few years in this city of northern Italy, where he came to admire the church and its famous The Last Suppermural by Leonardo da Vinci painted in 1497. Count Tyszkiewicz thought of the Italian artist as a perfect personality and artist!

The red brick basilica-type church was consecrated in 1926. The name of the Annunciation of the Blessed Virgin Mary was selected for it, and during the consecration ceremony, the 17thcentury sculpture of the Crucifixion was placed at the main church altar. The gift came from Pope Pius XI, whom Count Tyszkiewicz had met in Vilnius a few years earlier, when he visited Lithuania as a nuncio and an apostolic visitor in 1920.

Lentvaris Church of the Annunciation of the Blessed Virgin Mary is one of the biggest and most impressive examples of monumental painting found in Lithuania at the beginning of the 20th century. Its murals and sgraffito decorations reflect religious motives and cover the walls of the church almost entirely.

Sgraffito is a special painting technique where initially a few layers of different colours of paint are applied. The paining is engraved on the top layer, and then the plaster is scraped off to reveal lower layers of contrasting colours. This type of painting is a long-lasting work of art, reminiscent of antique vases and romantic or Byzantine mosaics.

The Sgraffito technique was intentionally chosen for the design of the Lentvaris Church décor. As mentioned above, the inspiration came from the Santa Maria delle Grazie Church in Milan famous for its impressive interior décor. Besides, it perfectly matched the prominent and magnificent architecture of the Church of the Annunciation of the Blessed Virgin Mary. Notably, the sgraffito technique was used in only one other place in Lithuania, i. e. Perloja Church located close to Varėna.

The Church is open: