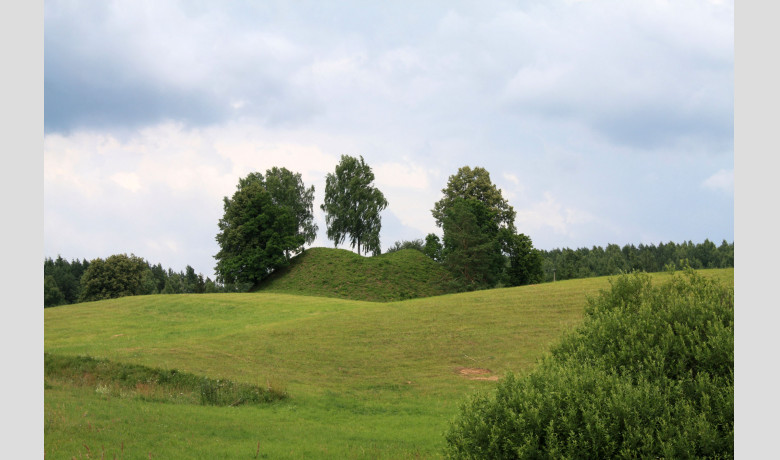 An important place of an eternal rest is situated in a hilly territory of Lavariškės village near Trakai. The walk in these places maybe will just inspire the thoughts about a relief of our country. But in fact, this is the place where Lavariskes site of tumuli is situated. Today you will find here 14 stone tumuli that have survived into the present. They were probably built here to guard the burned remains of the deceased people. Maybe this is one of the reasons why some ancestors keep calling Lavariškės Mound that is situated not far from the site of tumuli a Hill of Fire…Today the man-made hills of Lavariškės are overgrown with wild grass, bushes and trees. But if you will take a closer look, you will see old stones lying down on the ground: overgrown with moss and partly covered with black soil. These stones are not ordinary rocks, but the fragments of stone wreaths. It is unknown whose peace of souls are guarded by Lavariškės tumuli. But there is no doubt that people who are buried here were important and loved by others.

After all, a huge amount of soil is needed to build such the hill, and not one hill was built here, but a group of hills. And people used to bring all required stuff by carriages and with hands. It is absolutely a team work. […] people carry small amounts of soil for the deceased person little by little in their aprons, boots, hats, in the fold of their palm or otherwise. Building such grave requires an extremely united community, large number of people to do the work and very clear and strong feeling that this must be done. Trakai region saw many battles in Medieval times. For this reason, it is very likely that the great giants who are buried inside these man-made hills are brave military heroes or important rulers who were killed during a painful battle… Lavariškės Castle Hill stems to the sky not far from the tumulus. A fortress stood on this hill in the 14th century, and a settlement was situated in the foothill of the hill.