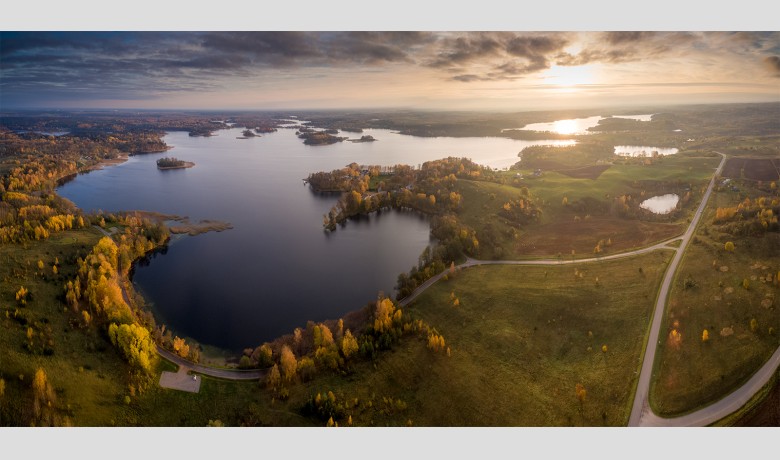 Trakai region, with its many lakes, is famous for the abundance of its natural and historical heritage. This treasure is the location for Užutrakis Manor House with its luxurious palace, often called the white swan of Lake Galvė. The beautiful homestead nestled on the eastern shoreline of the lake is unique with its exclusive geographical locale and lovely history.

Written sources first mention Užutrakis peninsula in the 14th century when Tatar nobles called it their home. Peninsula territories, also called the island of Duke Algirdas, has belonged to different owners over the course of its history. The prosperity of Užutrakis Manor is associated with the Tyszkiewicz family. At the turn of the 19th and 20th centuries Count Józef Tyszkiewicz and his wife Jadwiga built a luxurious residence, a Manor House with a palace, decorated with impressive Louis XVI style interiors,and an impressive terrace crowned with open pavilions and a lovely mixed style park.

In the old days, counts used to arrive to the Manor by water – a rafter transported them by raft through the strait of Lakes Galvė and Skaistis. Land travels were also avoided by high ranking guests of Tyszkiewicz, who visited the Manor for frequent meetings, family get togethers and informal banquets. Events were filled with music, banquet tables were stacked with French cheeses made in the Manor, drinks produced in the distillery and even locally raised roasted pheasant was served in the middle of the table!

The people who worked at Užutrakis Manor House and homestead rarely travelled by water. Farm tasks were carried out using the old ‘Potato Road’ which led through the fields towards auxiliary buildings of Užutrakis Manor, but nowadays this road winds its way along the shorelines of Lake Galvė. Travellers along ‘the Potato Road’ are presented with an excellent opportunity to enjoy the marvellous scenery that includes the view to the lake dotted with islands and an exquisite jewel – Trakai Island Castle.

Today everyone who wishes to visit Užutrakis Manor will need to travel by the old ‘Potato Road’. However, finishing touches are being made to the construction of a pier, so visitors will soon be able to reach the peninsula by water as well! The renovation of the Manor House and ongoing maintenance is the responsibility of Trakai Historical National Park directorate. For the convenience of visitors several viewing platforms and wooden rest benches have been installed along ‘the Potato Road’.

Tyszkiewicz Manor complex in Užutrakis was supported by a very well-run farm, which was transferred to the eldest son by succession without the right to divide the estate. The farmlands alone comprised about 800 hectares and a part of them were allotted to gardening and a mixed-style park.

An interesting fact is that pheasants, which belong to the family of ground living birds, whose males are known for their deep colours, were raised near the Manor. A pheasant specialist from Austria was brought in for this purpose. The Tyszkiewicz family served their guests roasted and masterfully prepared pheasant on special occasions.

The farm area of Užutrakis Manor House consisted of 19 masonry and wooden buildings: horse stables, a grain barn, a forge, cattle sheds, a warehouse and others. Ten of the former buildings have survived to this day. One of the most important buildings was the distillery, since the distillery was one of the biggest sources of income for the Manor.

Written sources inform that Užutrakis Manor House was served by about 60 servants and workers. As previously mentioned, to reach their ‘workplace’ they used the land road. One can guess that the road got its name because potatoes were delivered to the distillery.

The story tells us that the travels to the closest towns was long and expensive. Frequent ‘Potato Road’ usage was inconvenient and impractical, therefore families of Užutrakis personnel were forced to find ways to keep afloat. The women themselves fermented kvass, baked bread, did tailoring, knitted, made lard soap and so on.

The Manor lacked a doctor, however, so the servants and workers who got sick had to fend for themselves. Only on rare occasions, and with approval of the counts, was a doctor called in.

However, Countess Jadwiga established a school for the children of those poor servants. In her spare time, she took it upon herself to teach children to read and write, memorise short poems and songs. She also told stories about the region’s history.

Love for the French Style

There were stories that Countess Jadwiga used to say this phrase: ‘Love for everything that is French’. Count Józef freely spoke French, knew diplomatic protocol and was one of the very few in Lithuania who  adhered to savoir vivre, or rules of politeness and good manners.

No wonder then that the exclusively beautiful Užutrakis Manor park was designed by a French man –  Édouard François André. This world-renowned landscape designer created a unique water park that spans across the peninsula. Over 20 ponds of different sizes and shapes were dug and hundred-year-old oaks, pine trees and exotic plants brought in from abroad reflect in the water. Symmetrical (French) parterres with linden tree avenues, ornamental flower gardens, marble vases and sculptures were created in front of the palace.

Užutrakis was often visited by Russian diplomats, military and highest-ranking officials, because Count Tyszkiewicz earned his economical-military education in Saint Petersburg. He imitated Russian high society by bringing in a French chef and cheese maker. Lithuania for centuries was known for cheese making, but in Užutrakis they were made according to French recipes and traditions. It was believed that those cheeses, kept in a cold masonry building, were turned and stroked daily.

Užutrakis palace brings you back to the turn of the 19th and 20th century like a time machine. While restoring two of the Manor halls, every effort was made to preserve the luxury typical of the Tyszkiewicz family era. Today, visitors can examine authentic furniture, sets of china, weapons, mirrors made of Venetian glass and other interesting artefacts related to the lives of the counts. Following the traditions of the Tyszkiewicz family the palace often organises a variety of temporary exhibits, therefore you can frequently encounter music and enthusiastic applause here.