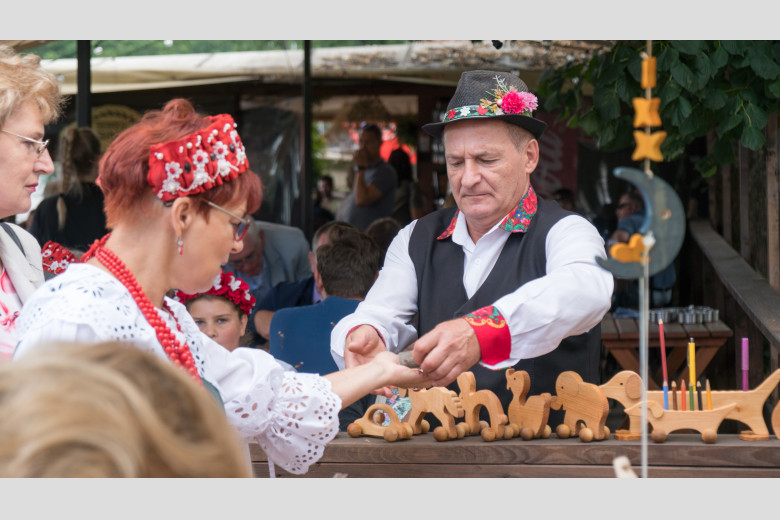 At the intersection of Karaimai and Vytautas streets, in the center of the former market or Town Hall Square stands St. Nepomuk Roadside Pole, it remembers the seventeenth century when this pole was used as a bulletin board. The pole acquired its current image only in the beginning of the 19th century when the sculpture of Saint John of Nepomuk was erected at the top of the column. St. Nepomuk protects against disasters in the water and is the patron of fishermen. In Lithuania, he is often found in chapels near the water.

Today St. Nepomuk Roadside Pole emphasizes and reminds us of the historical center of Trakai, where large fairs, markets and festivals took place. Historical sources mention that in 1470 this former market square was inhabited by people of various nationalities, probably traders, for whom the plots around the square were commercially important. At the beginning of the 16th century, when Trakai lost its political significance, cultural and economic stagnation began in the city. From then on, Trakai was an ordinary city, where trade and crafts largely met modest local needs. It is true that at the end of the century when the situation of the Crimean Karaites improved, and according to the Second Statute of Lithuania, Trakai became the center of the voivodeship, trade and crafts recovered.

Every year during the “Trakai Summer” festival, the bustling Town Hall Market attracts craftsmen from all over Lithuania, whose trade and demonstration of crafts stretches along Karaimai street. The main goal of the event is to gather creators and creative craftsmen and sell products of their craft. Other traders trading in imported non-compliant products are not allowed at the venue. It’s important to trade in non-mass-production items, food products, folk musical instruments and other products of the ethnic material heritage made from traditional raw materials by hand and other old or equivalent new technologies.

To preserve and foster the traditions of our nation so that we can admire them every year while spinning in the whirlpool of fun and enjoying the time proven tastes. To repeat, because by reliving the past in the present we rediscover traditions and even ourselves.

The program will be announced later.