Rykantai Church of the Saint Trinity 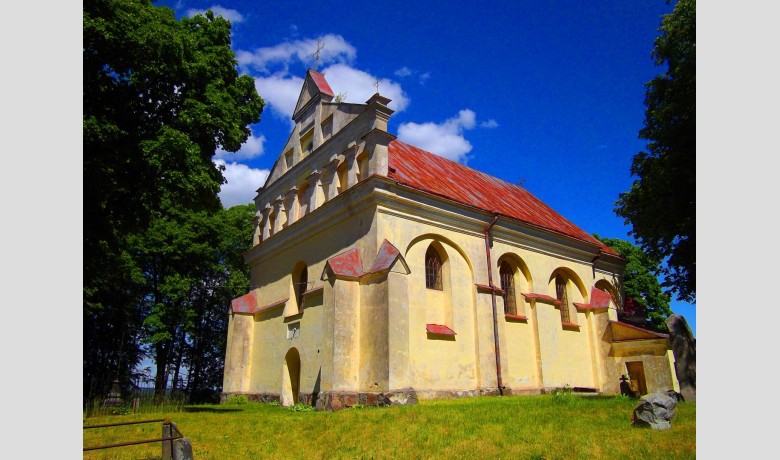 A wooden Evangelical Reformed church was built until 1555. Ruler of Rykantai Mikalojus Talvošas built a brick Evangelical Reformed church in 1585. In the 17th century, Rykantai became the property of Oginskis family. During the war between Russia and the Republic of Both Nations, the church was demolished by the Moscow army in 1655. It was restored until 1688 by Marcijonas Oginskis.

The church stood empty and abandoned in 1696. Church services were held in Rykantai Manor. In 1688, Rykantai and its church were given away to the Dominicans of Trakai. They did not want to hold services in an Evangelical Reformed church, therefore a new wooden church was built in 1725. It rotted away in 1784. It is believed that at the end of the 18th century services were transferred to the brick church. In 1792, Rykantai became a branch of Vievis parish. Church property and its liturgical supplies were stolen during the war in 1812. In the middle of the 19th century, the church has deteriorated.

The current brick Rykantai Church of the Saint Trinity is one of the oldest churches in Trakai district.

The church has Gothic structures, Renaissance forms, a rectangular plan, no towers, and a hall style with a three-sided apse and a sacristy. The interior has three naves separated by pillars. The fence of the churchyard is masonry. Murals dating back to 1668 remained to this day.

From the outside, the church is similar to Žodiškės Church located near Neris River in Belarus. Its interior is similar to that of St. Nicholas Church in Vilnius.