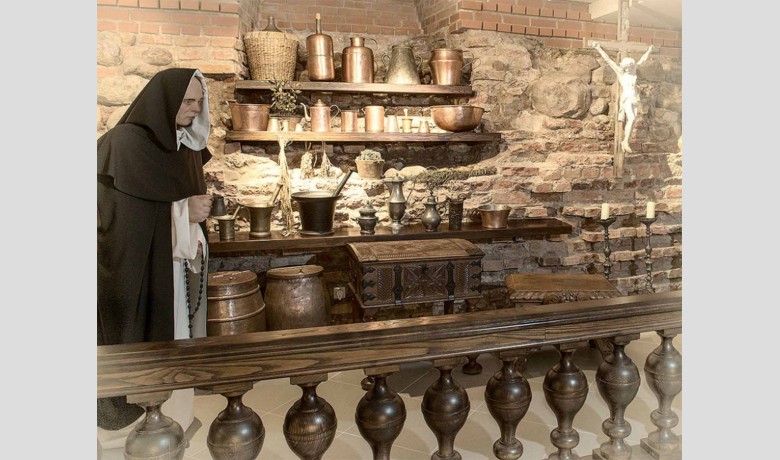 The Liturgical Art Exhibition was opened in 2005 on the territory of the Trakai Peninsula Castle, in the chapel of the former Dominican Monastery, and is a branch of the Trakai History Museum. Visitors are invited to take a closer look at various attributes of church heritage that represent sacral and cultural value, which include religious paintings as well as utensils that once belonged to the monks.

The area inside the former monastery complex was adapted to display valuable works of art. Today’s exhibition of church art comprises more than 200 liturgical works, valuable visual art works and various sacral objects representing the life of the church. Take a closer look at the monstrance decorated with the picture of the Blessed Virgin Mary of Trakai with the Infant, a unique 1709 stamp of the Trakai Dominican Monastery, a communion cup produced by Vilnius goldsmiths in the second half of the 16th century, and other ecclesiastic pieces such as liturgical objects, priests’ vestments, baptism coins, church stamps, distinctors worn by priests, and so on. Albarels, found among other exhibits, are dishes used in herbal and medical practice for holding medicinal ointments. A fragment of the monastery kitchen has been recreated in the restored cellar under the chapel, where pieces of the monastery’s everyday life and various objects used by the order’s monks are on display.

Today, Masses are no longer celebrated in the chapel, but thanks to the Liturgical Art Works Exhibition this cultural and historical monument has once again acquired its sacred spirit.

The Dominican Order and the History of the Monastery

The Dominican Order, or the Order of Preachers, was founded by the Spanish priest, Saint Dominic of Guzman, in the 13thcentury. In Latin, Domini canis mean the ‘Hounds of the Lord’, and one of the symbols of the Order is a white black-spotted dog holding a burning torch in its mouth. The friars were immersed in contemplation; they used to create schools and universities where they would teach. Their goal was to preach the Gospel and study.  The most commonly used symbols of the Dominicans are the lily, the book, the rosary, the star and bread.

Trakai Peninsula Castle was built by Grand Duke Kęstutis of Lithuania at the end of the 14th century and was one of the largest castles in Lithuania. Perhaps that was the reason why it was called the Great Castle. It was used for various purposes throughout the centuries. First, it was the Grand Duke’s residence, and then it was converted into a prison for high-ranking foreign captives and enemies of the state. At the end of the 17th century, the Peninsula Castle was given to the Dominican Order.

In the second half of the 18thcentury, the friars began building a classic style church with two towers. Unfortunately, due to a lack of funds the church was only built up to the height of the ground-floor windows. At the beginning of the 19thcentury, the unfinished building was reconstructed into a monastery and a chapel. In 1882, the Chapel was consecrated in the name of the Archangel Michael. The monastery’s complex consisted of 11 cells, a sacristy, a school, a bell tower, a dining room with a kitchen, stables, gardens and flower beds looked after by the friars.

Shortly after the uprising of 1863-1864, the tsar’s government closed the monastery and handed it over to the police detention centre. In the period between the two wars, the premises were used as the court archive and police offices. When Vilnius District was occupied by Poland, the building was taken over by the Polish Border Police. After the Soviet occupation it was handed over to the KGB and police: a number of political prisoners were jailed there.

The territory of the Peninsula Castle was damaged many times. However, in the 1960s efforts to preserve Trakai cultural heritage objects were initiated, which in turn sparked interest in the Dominican structures. In 1990, Trakai History Museum Administration moved into the partially renovated premises of the former Dominican monastery. The Sacral Art Works Exhibition was opened in the former monastery’s chapel in the summer of 2005. The permanent exhibition revitalised the space and filled it again with the religious Spirit.

The Liturgical Art Works Exhibition established in the restored chapel of the Dominican monastery gives visitors an opportunity to have a closer look at the priests’ ceremonial clothing and special accessories. A cope, the most adorned and significant liturgical garment symbolises the Lord’s boundless love, purity of the clergyman, their righteousness as well as the grace of the Holy Spirit. You can also take a closer look at a pair of bishop’s sandals, previously calledcampagi, the mitre(traditional, ceremonial headdress of bishops made from the most expensive materials and worn during important ceremonies), etc.

One of the most adorned and important elements of Catholic liturgical ceremony is the monstrance.It is used for the exposition of the Blessed Sacrament. For this reason, they are often made of precious metals and are richly decorated with various gemstones. Visitors can also have a closer look at different parts of the monstrance as well as a chalice, a goblet used to sanctify the Eucharistic wine and bread during Mass.

The Liturgical Art Works Exhibition has many valuable pieces. The Dominicans Worshipping the Risen Christpainting should be mentioned among the most notable paintings. According to historians, it portrays the founder of the Dominican Order, Saint Dominic himself. Other important works include the portrait of St. Casimir, who came from the Gediminas dynasty that ruled over Lithuania as well as the portrait of Vytautas the Great.

The exposition includes many sculptures depicting St. Casimir, St. Florian (the patron of fire-fighters, who miraculously saved a burning house with one bucket of water), St. John of Nepomuk (the patron of Trakai and those suffering from water-related accidents). The highlight of the exposition is one of the rarest sculptural compositions found in the Lithuanian folk art titled The Last Supper.

Since ancient times the ringing of church bells has symbolised the scaring away of evil spirits. Bells at the top of high towers invite people to get together and celebrate holidays, pray and unite in times of misfortune.

In Lithuania, the craft of bellfounding dates back to the 14th century. Bells cast by Jonas Delamarsas, a distinguished 17th century bell founder, spread their heavenly sounds from the towers of Vilnius Cathedral, St. Peter and St. Paul’s Church, Pažaislis Monastery and many other belfries until this day.

Unfortunately, the czarist army destroyed many of the old bells when Lithuania was annexed by the Russian Empire in the 18thcentury. The craft of Lithuanian bell-casting started to decline, while church bells brought in from Kaliningrad, Russia, Poland and Latvia became increasingly popular. Today, the Liturgical Art Works Exhibition provides an opportunity to see several 18-19th century church bells cast in Vilnius, Prussia, Riga and in Western Europe