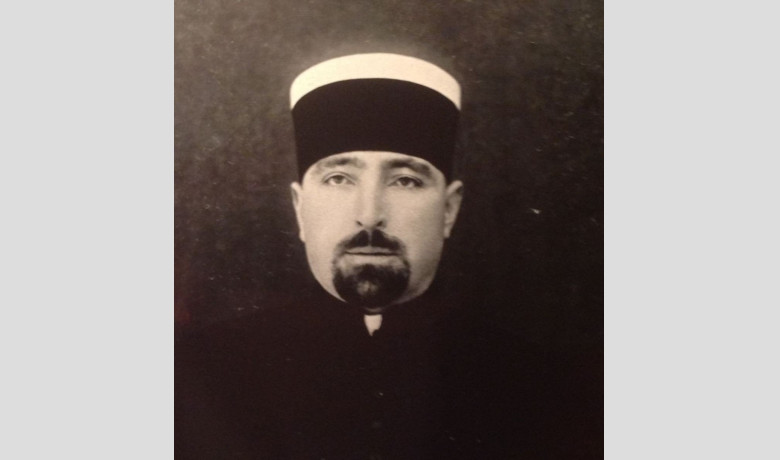 It is one of the most prominent Karaite cultural figures of the 20th century. Simon Firkovič was born on 28 November 1897 in Trakai. He went to school there. After being conscripted into the army he was sent to the front line and served in World War I. After the revolution broke out in Russia, together with his older brother he moved to Yevpatoria where a considerable number of Trakai Karaites had settled after fleeing their home country to escape the war.

While in Yevpatoria, he enrolled and graduated from a Karaite spiritual seminary. After returning to his home country, he was elected a senior clergyman of the Karaite community of Trakai and became the only member of the Trakai Karaite community who acquired professional clergyman education.

S. Firkovič was an educator, folklorist, poet, playwright, translator, and a passionate promoter of the Karaim language. For nearly 60 years he served as a senior clergyman of the Lithuanian Karaite community even when the Kenesa of Trakai became the only remaining Karaite house of worship in Europe. Besides being a famous and influential figure in the Karaite community, Simon Firkovič is remembered as an individual who always made time for everyone who wanted to meet him and who, in a sense, became a symbol of Trakai and a town celebrity. Every morning he would row his boat out onto the lake to catch fish and every evening he would go for a walk around Trakai Island Castle as long as his health allowed. Probably everyone who ever visited Trakai crossed paths with this man who was always seen walking in a dignified posture and who never lost his spark and the brooding look in his eyes. And you could hardly find a single contemporary local resident of Trakai who had never had a chat with Firkovič or his wife as both were very kind and attentive to others.

It is important to note that S. Firkovič played a particularly important role in the survival of the Karaite community and its religious tradition in Lithuania following World War II. During this period, he even sometimes was forced to go underground due to the complex political situation in the country. Following the outbreak of the war and especially during the post-war period, the relations between the communities broke down and a common religious and ethnic life of the Karaites was lost. It was only thanks to the efforts of Simon that a single kenesa still remained active in Trakai as he did not step down as the community’s clergyman and managed to keep their house of worship (which was the only kenesa left in the former Soviet Union) open, whilst also taking care of every aspect of the religious community’s life. During that period, it was not safe for civil servants, pupils and students to attend religious services at the kenesa. For this reason, Simon began conducting religious services at his home. Marriage ceremonies were performed, newborns were blessed and other religious ceremonies were held at his house. It is this dedication that shows just how passionate he was about the Karaite community and its culture in general.

Simon Firkovič had a strong sentiment for fellow Karaites and his activities were not solely confined to the Karaites of Trakai. In ethnic and religious contexts, he closely cooperated with other religious Karaite communities that existed in Vilnius, Lutsk, Halicz, and Panevėžys before the war.

On the occasion of the 600th anniversary of the settling of the Karaites and Tatars in Lithuania, a memorial plaque dedicated to Simon Firkovič was unveiled on the building No. 42 in the Karaites’ street where the prominent clergyman resided. The memorial plaque bears the following inscription: ,,Simon Firkovič / Karaj Din Jesisi / 1897 – 1982 / a poet, senior clergyman / and preserver of national culture / lived and worked in this house / from 1920 to 1982”. This house has a rich history and it has been included in the list of cultural monuments.

On 18 July 2017, a square named after Simon Firkovič was unveiled in a solemn ceremony near the bridge leading to Trakai Island Castle on the occasion of the 620th anniversary of the settlement of the Karaites in Lithuania.