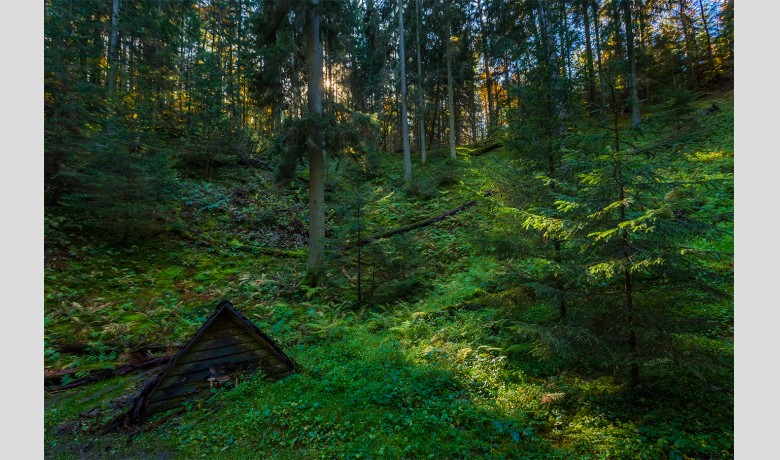 The Sinkhole of Strėva is also known as a failure or a doline and is referred to as a sister of the Devil’s Pit. This mysterious place has inspired a number of legends and stories. Ancient Lithuanian mythology says that it was the place where the devils’ tavern sank into the ground!

The Sinkhole of Strėva is located in the Spindžius Nature Reserve by Strėva Village on the territory of Aukštadvaris Regional Park. The spectacular abundance and diversity of flora and fauna gives the reserve a special status not just within Lithuania. The Reserve is also listed as an EU protected Natura 2000 site. Trakai Forest Enterprise is responsible for the regular maintenance of this area so that this beautiful forest territory of state importance is attractive to the public.

Scientists claim that the Strėva Sinkhole is a doline of thermokarst origin and was formed about 18,000 years ago. When glaciers were retreating, various deposits and sediments blocked a piece of ice that had fallen off; this then melted and opened up a ravine in the ground. The estimated length of the ravine is about 150 metres while the width is 100 metres. A giant spruce trail leads visitors to a 20-metre-deep hole. There is a scenic viewpoint close to the ravine and a pedestrian ecotourism trail circling around it offers visitors an opportunity to have a closer look at this natural phenomenon from all sides. Interestingly, a lot of poisonous plants are found in the area!

Notably, the Spindžius Nature Reserve is the proud home to one of Lithuania’s ancient forests. Very old trees adorn this territory including tall pine trees, oaks and other types of long-living trees. Different varieties of trees have stood here for four generations. A part of the ancient forest’s territory is dedicated to an untouched forest not affected by human activity, where there is a high probability of finding various endangered or rare vegetation species. Some plants that grow there are protected not only in Lithuania but also in the European Union.

According to one of the most famous legends, the tavern that once stood on the site of the Strėva Sinkhole was a place for the devils to feast. Once, devils decided to throw a wedding on a day of fasting. With the sounds of the first roosters crowing at dawn, the tavern went down into the ground with the devils still raving in it. Locals say that even still strange and mysterious sounds can be heard near the ravine. Today, at the bottom of the Strėva Sinkhole a roof ridge of a wooden house still sticks out of the ground reminding everyone of the legend.

According to another legend, an old tavern once stood here; one of its regulars was the father of a very large family. Once his wife found him there and tried to take him home. When the man refused, his wife became furious. It turned out she was a witch! She decided to punish her husband and the owner of the tavern. She went out on to the road and cast a curse. The tavern immediately sank deep into the ground with everyone still in it.

People also say that a high hill with a beautiful big crystal palace on top of it once stood here. Devils lived in harmony in the fabulous palace, and each knew exactly what his duties were. They would all agree on what wicked tricks to pull or whom to get fighting with each other. One day they could no longer share the power and started arguing. All of them forgot their duties, thus creating havoc. The sight of quarrelling devils angered the God Perkūnas (Thunder), so he threw thunders that shattered the castle and sent all the devils deep down into the ground. People say that if you listen carefully you can still hear the devils shouting and arguing down below.

The Strėva is a marshy river with rather dense vegetation around it, linking together about 20 lakes. Powered by the spring water, the Strėva flows eastwards, i.e. against the rising sun. In Lithuanian folklore, this phenomenon symbolises the river’s sacrality. From ancient times, the Strėva was considered a sacred and special river. Locals have always spoken highly of the clear stream waters flowing into the river.

The Green Path goes along the winding banks of the Strėva River circling around Spindžius Forest. The trail takes tourists to the Strėva Sinkhole as well as to many other places. It also helps people to avoid getting lost in this somewhat eerie and mysterious environment…

The Hill of Streams holds one of the surprises along the Green Path. It is a rather rare natural phenomenon that is valuable not only from a natural, but also from a cultural point of view. A range of ice-free streams come flowing down from all directions and feed the Strėva River. On the way, they help the formation of swamps and morasses much loved by beavers.

In ancient Lithuanian folklore tradition, ice-free streams were always regarded as sacred places, and their water was believed to have healing powers. It is said that sick locals would bring this water to their houses, while herdsmen used it to wash their tired feet.

The Orchid Kingdom deserves special attention.A plantation of Lithuanian orchids reigns on a small hill! The hill is home to a collection of especially vulnerable variegated orchids including the Lady’s-slipper orchid, which is protected on the territory of both Lithuania and the EU.

According to Lithuanian folklore, in ancient times women tried to grow these flowers in their home gardens, but all to no avail. Therefore, locals consider these plants as whimsical or even mysterious. Orchids, sometimes called ‘the forest beauties’, were considered magical plants. They were widely used in folk medicine and fortune telling.