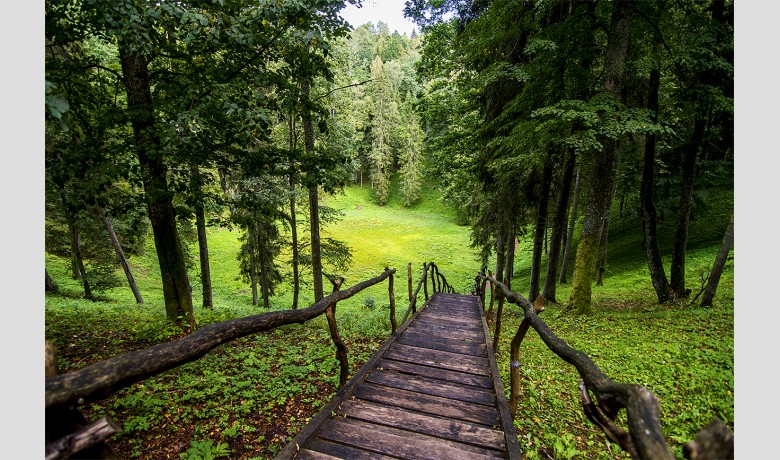 It hides deep in the forests of Mergiškiai Landscape Reserve at Aukštadvaris Regional Park. Aukštadvaris Region is known for its old and distinctive history and culture. The first people settled there as early as the 3rdand 2ndcentury BC. In addition to important archaeological monuments, wooden castles, hill forts, kurgans and ancient settlements, this territory has a uniquely beautiful relief. It is the highest part of the Dzūkai Highlands, rich in hills, valleys, pits, ridges and lakes. Four kilometres from the Devil’s Pit is the highest point in the vicinity – Gedanonys Hill. The place where the Verknė and Strėva rivers originate is a unique natural treasure. This visitor-friendly territory is of state significance, and the Trakai Forestry Enterprise is responsible for its maintenance.

There are many deep pits in Lithuania. The Devil’s Pit is the deepest: it is funnel-shaped and is about 40 metres deep. The regular circular upper pit diameter is 200 metres. The peat layer at the bottom of the Pit is about 10 metres tall bringing the total depth of the Pit to about 50 metres. It is believed that in ancient times the Pit was even deeper.

The Trail of Secrets of the Devil’s Pit goes down to where a viscous swamp of 60 metres in diameter lies stagnant. In summer, it is tempting to wade in it, but people are advised to refrain from doing so as the swamp is very viscous and dangerous. It is believed that this swamp is connected with neighbouring deep Škilietai lakes through underground tunnels. Legend has it that local livestock fell into the Pit tempted by the devil and were later found floating in one of the nearby lakes. Another legend tells a story of a giant’s skeleton that lies in the vicinity: the Devil’s Pit is his mouth, Škilietai lakes are the eyes and the nose is the Pamiškė Hill Fort.

Tree anomalies are found in the area of the swamp and the loamy ridges surrounding it. The desire to explain this strange natural phenomenon attracts a lot of scientists. They claim that deviations of the energy field can be recorded around the Devil’s Pit. In any case, it is a place distinct for the collision of strong geological biofields. People tend to experience strange sensations having visited the Devil’s Pit and especially after going down to its very bottom.

The Origins of the Devil’s Pit

The Devil’s Pit is a truly mysterious place. Even its origins are a mystery to be solved. Speculations, reasonings and legends have been passed on from generation to generation. A single scientific explanation is yet to be developed; however, there are a number of important hypotheses. One of them says that thousands of years ago, there was a glacier covered with rocks at this place. As it gradually melted, this impressive cavity was forming in the process. Another one states that a melting glacier formed a strong waterfall. Over time, the force of the falling water might have formed this deep pit. It is also believed that the hollow opened up when the underground stream brought fine sand and sediment to a small Škilietai lake.

Or, perhaps the Pit is the result of a fallen meteorite? The hypothesis of the meteorite crater is further supported by the relatively small and regular diameter of the Pit and various splintered boulders found on the steep slopes of the Pit and around it. Similarities can be found when data taken from other meteorite-formed crater pits are compared. Scientists are still looking for more evidence and are in no rush to confirm this theory.

According to Stories and Legends…

A long time ago, a beautiful church stood on a high hill at the place where the Devil’s Pit is today. Once a villager was passing by when he saw a local priest walking with a young girl. He became really angry about such inappropriate behaviour and shouted: ‘You deserve to fall deep into the ground!’ Together with the priest and the girl, the church fell deep down into the ground. It is said that on the days when there is water in the Pit, those with good eyesight can spot the church towers, while honest men would hear the church bells ringing.

Once there was a man who wanted to marry girl he liked. Unfortunately, he was married already, so he could not marry her in the church. He ignored the prohibition, threatened the priest with a sword and made him solemnise their marriage.  As soon as the groom started saying his wedding vows the church suddenly collapsed into the ground taking the couple with it. The ringing of the church bell could be heardfor the next three days.

One day, God saw a priest kissing a local matron. He became so angry that he pounded his fist on the place so hard that the church with the hill went straight down into the ground.

Devils have their midnight feast here. People say that they could hear the devils screaming and raving. Those who pass by at night can see devils, so no one dares to go close to the Pit in the dark. That is the reason why this horrifying place was named the damned Devil’s Pit.

In Lithuanian mythology, the Devil is often seen as a real creature, sometimes related to the world of the dead and sometimes to the giant behind the creation of nature. It is not surprising that in our country more than 400 natural objects bear his name. According to the belief of the ancient Balts and other Indo-Europeans, the devil’s finger is a magical stone. Our people relate the stone with the god called Perkūnas, (Eng. Thunder). The stones of yellow, brown, blue, grey or black colour are also called thunder-bullets in the region. People believed that God Thunder was throwing the stones at the Devil during a storm, and if he missed the ‘bullet’ went deep into the ground to emerge on the surface a few years later.

Lithuanian folklore suggests that the devil’s finger could be worn as an amulet against devils, witches and other evil spirits. The house that has a thunder-bullet inside will never be struck by lightning. This stone is also used in folk medicine to be placed on the sore area or to be taken as a drink with ground thunderstone powder in it.