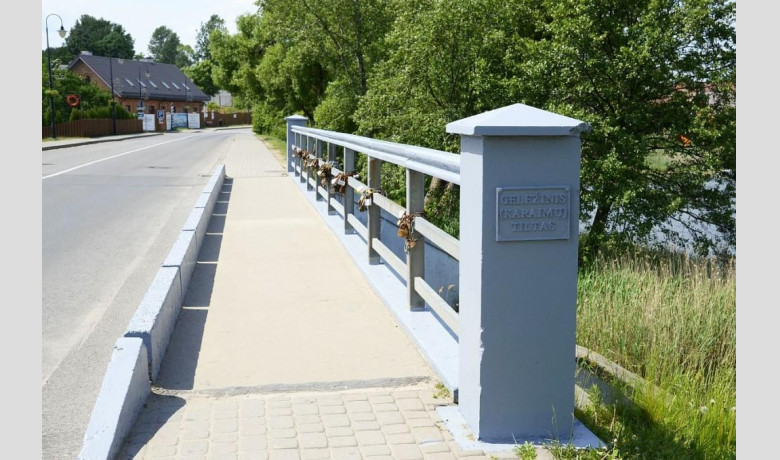 Nearby the old Royal Harbor
(Karaimų str. 57A)

While recorded mention of the bridges of the town of Trakai dates back to as late as the 16th century, these bridges have a history that is worth exploring and remembering. First knowledge about the Karaite Bridge, also known as the Iron Bridge, which connects the strait between Lake Galvė and Lake Totoriškės dates back to 1515 when voivode of Trakai, A. Astikas, purchased two manor estates near the bridge. Reference to this bridge was also made in 1570 when Žygimantas Augustas approved the Magdeburg right for Trakai.

Since Trakai, like the rest of the Grand Duchy of Lithuania, was home to different ethnic (Lithuanians, Karaites, Tatars, Russians, etc.) and religious groups from the late 16th century, the town was divided based on the borders of the areas populated by these groups.

In oral tradition, the Karaite part of the town was described as the area stretching “from the pole to the bridge”. This phrase refers to the part of the town stretching from John of Nepomuk wayside shrine (the Karaites call it “the pole” perhaps due to the fact that there are no saints in their religion) to the so-called Karaite Bridge or Iron Bridge across the strait between Lake Galvė and Lake Totoriškės.

The new privilege granted by Žygimantas Augustas stated that following the collapse of the bridge across Lake Galvė (from Kaunas side, i. e. at the northern end of the town), the town dwellers were responsible for rebuilding it. As a compensation for the funds spent on building the bridge, the town was granted the right to collect bridge charges: one coin for a single carriage, and two coins for a two-horse drawn carriage. The charge was not to be collected from people belonging to “the knightly class” crossing the bridge. This helped to fund the rebuilding of the bridge which took place in 1584.

However, in 1611, the townspeople of Trakai made a request asking permission to increase these charges as the bridge repair works required a considerable amount of funds. Their request was granted and from that point onwards two coins were collected for a single-horse drawn carriage. As agreed, the collected funds were used for the bridge repair works so that the merchants travelling between Vilnius and Kaunas would not sustain undesirable losses. It is noteworthy, that this request was not without grounds. It suggests that the former charges set for crossing the bridge were not sufficient perhaps due to the fact that the number of merchants travelling across Trakai decreased. Otherwise, there would not have been repeat references to the same orders included in the ruler’s subsequent letters. For instance, in 1620, Zigmantas Vaza ordered the merchants of Kaunas, Vilnius and Panemunė region to travel through Trakai. Fines were to be imposed on those who disobeyed the order.

Over time, maintaining the bridge still posed challenges, especially during the times where the strait between Lake Galvė and Lake Totoriškės was wider so the bridge became a town-wide issue.

For example, the wooden bridge was susceptible to decay and there was a high risk of accidents so part of the bridge was dismantled. A recorded mention appeared in 1833 stating that following such type of accident, a project for constructing a new bridge was initiated.

As mentioned previously, the Karaite Bridge was also called the Iron Bridge but the fact that it had to undergo repairs so frequently hardly justifies this name. For this reason, in 1845, the reporter of Druskininkų Šaltinių Undinė raised a question as to why the Trakai Bridge was called the Iron Bridge, and he guessed it was because a small amount of iron was used in constructing the bridge as one could hardly describe the bridge under construction as made of iron.

In 1863, the Tsar’s army dismantled the bridge completely to protect themselves from insurgents. A few years later, in 1868, trees were designated in the forest for the purpose of rebuilding the bridge; however, they were still not brought to the site by 1871 thus the site remained empty.

It is believed that it was only a few years later that the new bridge was built. Embankments were made on each side of the bridge to make it shorter. During that period, trips to Kaunas led through the road that ran along the western shore of Lake Totoriškės.

Today, we see a short, tall, durable bridge built during the Soviet period after implementing complex earthworks to raise the ground level, and the old, low and long wooden bridge became part of our memory.