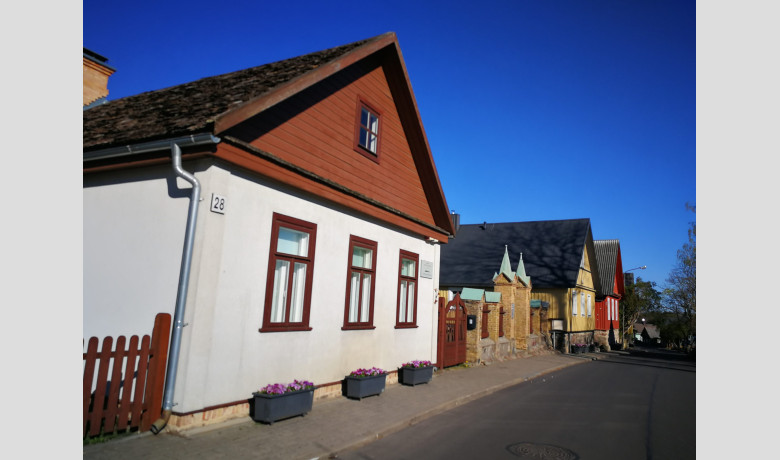 The first Karaite school aimed at religious studies was built in 1576 near the Karaite temple (kenesa) in Trakai. Despite the school’s religious affiliation, the students were also taught their mother tongue, the Karaim language, which belongs to the Turkic family of languages. The Karaim language emerged in the 9th–10th centuries on the basis of the languages of the Turkic tribes (the Khazars, Kipchaks–Cumans or Polovcians) who lived in the Khazar Khaganate. After adopting the Karaite religion, these tribes, united by a common religion and language, formed a Karaite ethnic group.

The school was rebuilt after it was destroyed by fire in 1879. The school had 2 teachers and it was attended by 27 boys. One of the teachers taught religion. The treasury allocated 400 roubles for the school, and an identical amount was donated by the Karaite community. The school operated for as long as four decades before it was closed for good in 1940 after experiencing some painful losses due to the cataclysmic events of the 20th century.

On 9 October 2008, Karaite religious leader, hazzan, consecrated the rebuilt building in which a Karaite school and a religious centre was opened. The building is an interesting architectural solution. White as a swan, it has a three-level roof which slightly descends from the street towards Lake Totoriškės. Each part of the building has a separate entrance. The building is surrounded by a fence with widely spaced pickets. This beautiful building is like a calling card for other Karaite buildings with each having three windows overlooking the street. Once inside the building, visitors can check out the amazing interior of the 18th century hall with its walls made of natural logs, the ceiling with timber cross beams and the ancient rural lanterns used as an imitation of oil lamps. Every detail here preserves the spirit of the past.

It is important to note that the Karaite community’s efforts to preserve their language have yielded some positive results as the domestic and liturgical use of the language has undoubtedly helped to preserve its richness and uniqueness and contributed to its survival. Moreover, an international Karaim language camp takes place each year in Trakai, attracting Karaites or their descendants from across the world. The goal is to preserve Karaite culture and the Karaim language and to promote continued value of Karaite culture and active interest in the Karaim language, in this way ensuring that it continues its existence in our modern world.