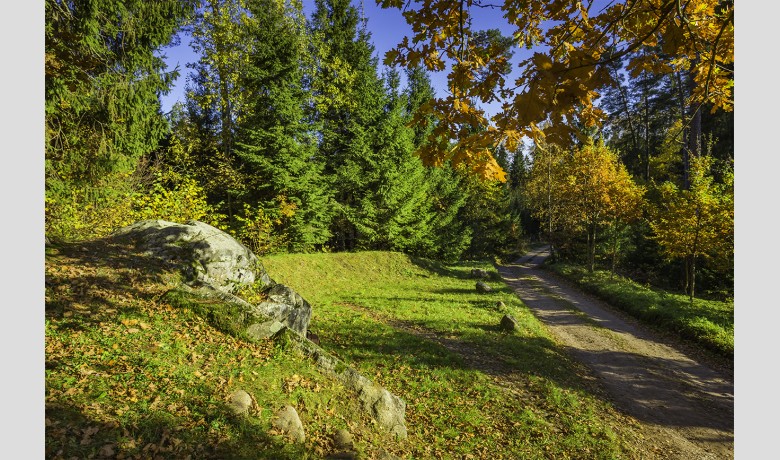 Sunk into the ground, the Stone of Nikronys is sometimes called the ‘Great Stone’ and can be found in Aukštadvaris Regional Park. The stone represents a natural geological monument and is located in the Babrauninkai Forest, between lakes Sienis and Vernėjas. Trakai Forest Enterprise is responsible for taking care of the stone as well as the surrounding areas so that they are visitor friendly.

The Stone of Nikronys is a massive boulder of glacial origin on which up to 40 people can stand at any one time. The size of the stone is indeed impressive with its length reaching 6.3 m, width – 3 m, and height – 2.2 m. This irregularly shaped grey granite-coloured stone could be between 14,000 and 16,000 years old. Geological studies show that the so-called Scandinavian stones represent a unique feature of Aukštadvaris Regional Park. It is believed that just like many other giant stones located on the territory of Lithuania, the Stone of Nikronys originated somewhere in Scandinavia millions of years ago. Over the course of the last ice age, these boulders were rolled down to Lithuania.

Interestingly, various signs, letters and symbols are clearly visible on the Stone of Nikronys.  For example, quite sizeable (about 35 cm tall) letters ‘MOPT’ are inscribed on one side in a 2-m horizontal strip. Above the letters, an arrow or a pointing sign can also be seen. On the other side of the stone one can see an even-sided cross which is about 30 cm long. Written sources indicate that two crosses were inscribed here in the past. Another drawing on the stone resembles a coat of arms…

Because of its puzzling signs, the stone of Nikronys is surrounded by mystery and associated with Lithuanian history and ancient Baltic mythology. The enigmatic boulder has long attracted famous archaeologists, historians and experts of different fields. It is not surprising that a lot of stories have been created about this unique site of natural heritage.

The first written source mentioning the Stone of Nikronys is the book by Petras Tarasenka Footprints in the Stonepublished in 1958. He gave a detailed description of the appearance of the stone and the signs inscribed in it. The letters ‘MOPT’, an arrow, a pointing sign, a cross and a coat of arms – all inspire different stories, speculations and discussions.

According to locals, in about 1904-1905, the Stone of Nikronys marked the border between the state forest and the land of a noble lord. The landlord inscribed the ‘MOPT’ letters and the sign on the stone pointing towards his land. Local residents testify that the mysterious ‘MOPT’ letters are the initials of the Polish phrase ‘Moje pieniadze tutaj’, which means ‘My money is here’. In fact, it is believed that a hidden treasure lies underneath the stone. This is clearly evidenced by the remains of the attempted diggings left by treasure hunters.

On the other hand, it is argued that the Stone of Nikronys could not have been a sign separating the lands, because it lies right in the middle of the former Odyniec family-owned lands. It is also known that noble families used to carve their initials and coats of arms in the stones, thus marking their property or honouring the memory of the deceased. Helena, the daughter of Vladislav Odyniec, the last owner of the estate, has indicated that the letters ‘MO’ stand for Michal Odyniec. Documents secured in the Aukštadvaris and Onuškis churches testify to the fact that he was a Trakai-based court official, a judge in charge of the land trials. Therefore, ‘MOPT’ might stand for ‘Michal Odyniec Podkomorzy Trocki’ (Mychal Odyniec, Trakai judge). In addition, the daughter of Vladislav Odyniec has confirmed that the Odyniec family coat of arms contained the image of a wild boar just like the one on the stone.

The residents of Aukštadvaris and other districts around Trakai have preserved the memory of the noble Odyniec family until the present day. Local people regarded the family members as noble dukes, although the Odyniec descendants have not used this title since the 17thcentury. Vladislav Odyniec, the owner of Nikronys Mill, was one of the people behind the establishment of Aukštadvaris parish and the initiator of the construction of a local church.

Treasures Do Not Open the Doors to Heaven…

Many legends talk about the treasures hidden underneath the Stone of Nikronys. It is said that the direction of the place where the treasures are located is indicated by the pointing sign and the ‘MOPT’ letters detail the distance to it. The remains of the treasure hunters’ attempts indicate their countless efforts to find it…

A popular story suggests that Vladislav Odyniec hid his money in the ground underneath the stone and… then forgot its exact location. Allegedly, he spent much time looking for it, but all in vain. In despair, or possibly under the influence of strong spirits, he jumped under a train.

Some legends even link the treasures to Napoleon. In 1812, Napoleon was resting in Babrauninkai Forest when he decided to hide his golden coins and tableware. So, he ordered the soldiers to bury his precious possessions in the ground and put a massive stone on top of it! Another story suggests that the news of hidden treasure reached Napoleon’s soldiers. They started digging and… discovered the treasure! However, that was not money, but lots of books.

Today, no matter what the legends say, we know one thing for a fact. Recently, a local tractor-driver, who was working next to a neighbouring old cemetery, uncovered a pot of money. Today, everyone can take a closer look at it in the Trakai Castle Museum.

Alka – a Sacred Place of the Balts

In ancient times, the stone of Nikronys was worshipped and considered a holy object. Perhaps, it used to be a sacrificial stone attributed to the pre-Christian religion? Maybe a long time ago ancient priests used to light a sacred fire here? The crosses carved in the stone are often regarded as symbolic signs of the Sun.

Another interesting fact is that at the top of the stone there is a man-made 26-cm deep hole, holding at least a single drop of water at all times. It is believed that this water is sacred and has healing properties. Of old, people would come here from afar eager to put this water on their eyes. After the snowfall, people would drink this water and take it to their homes. Believers not only used to wash their eyes here; they would leave some money for the priest to celebrate Mass.

Old men say that sometimes lights wander here at night, but they are visible only to those who are truly kind. Some claim that the site of the stone is a haunted place…