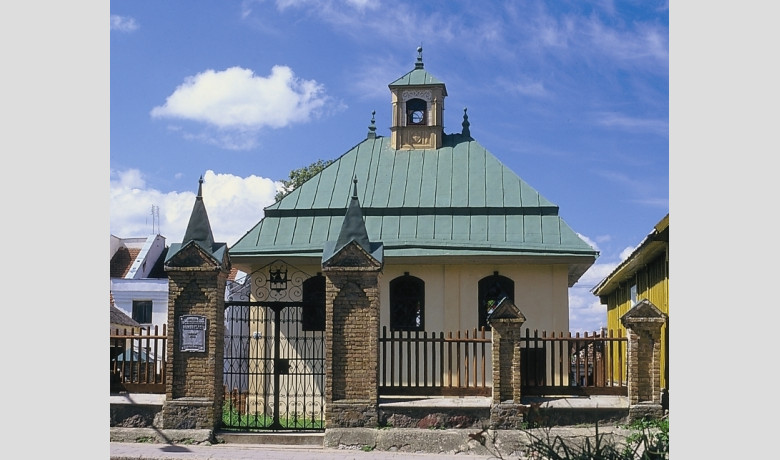 It can only be viewed from the outside or online.
https://bit.ly/3C3XDSG

“Kenesa” comes from the Arabic word kanisa meaning “church”. However, kenesa is not only a house of worship. It has a far higher spiritual status and therefore only religious rites can be held at this place. The Karaite religion (Karaism) emerged as a distinct religious movement in the 8th century in Mesopotamia (Iraq). It is known that the Karaites adhere to the simple text of the Old Testament and reject all commentaries or additions as the moral code and spiritual life of the Karaites are shaped by the truths of the Bible.

The first kenesa in Trakai was built in the late 14th century. It was destroyed and rebuilt several times. The house of worship was damaged by fire several times all the way down to its foundation. After the last fire in 1824, when the kenesa was again destroyed, the community made a decision to build a masonry kenesa. However, after failed attempts to secure funds, a wooden kenesa was built instead. It has survived to this day. During the inter-war period, the Kenesa of Trakai was repainted several times but retained its uniform architectural style and floor plan, and to this day, it corresponds to the architectural restoration project created by Michail Prozorow. During the Soviet era, the Karaite Kenesa of Trakai was the only officially functioning Karaite house of worship in Europe although people were not formally allowed to engage in worship at the kenesa from the 1950s onwards.

It is worth mentioning that the Kenesa of Trakai boasts a really unique interior which is sure to leave a strong impression on visitors. This unique two-storey wooden heritage object embodies the features of Karaite architecture and interior design. The front façade of the building has three windows, a feature characteristic of traditional Karaite houses which can be seen in the streets around the Karaite house of worship. There are ten windows decorated with arc-shaped stained glass with profiled edgings on the four walls of the buildings high above the floor, close to the roof cornice. Above the roof of the temple there is a small, elegant quadrangular tower with four windows facing the four directions of the world. The tower, which once served as a lantern, is also covered with a tin roof which has a figurative spike with a small ball at the top.

It is interesting to note that the geometric and floral ornaments and motifs characteristic of Karaite folk art are intertwined at the house of worship. The floors are carpeted in all rooms which was not a common interior decoration trend.

Once you enter the Great Hall, you can see two rows of benches with raised backrests. The Karaites have a really beautiful tradition here. Everyone who prays in kenesa has their own a seat where their ancestors prayed for centuries.

The kenesa itself is divided into three spaces. The first one is an entrance room where all worshippers gather before the service. Then there is the main prayer room for men, which has an altar and which can be accessed from the entrance room through three entrances. Traditionally, Karaite altars were made of cypress wood to emphasize the nation’s southern roots. The surviving altar of Trakai Kenesa consists of three levels and is very ornate.

Finally, there is a four-column balcony designated for women. It also accommodates a gallery for women to pray. In this gallery, the entire wall facing the altar is equipped with cavities at an eye level, divided by low turned wooden neo-Gothic balusters which create window-like formations. Through them, women can watch what is happening in the great hall of the house of worship. Although, as in all temples of Eastern religions, men and women pray separately in kenesas, there is a bench on the first floor which is usually used by women who find it difficult to get to the second floor.

There is also a tradition for women to kneel at the entrance to the great hall facing the altar before ascending to the gallery. The men enter the great hall of the kenesa by following the clergyman just before the start of the service. All believers praying in the kenesa must cover their heads.

One of the more interesting features of the kenesa is the washbasin attached to the wall in the right corner of the porch, which was used for ritual washing before the service. Now this unique interior element only performs a decorative function.

Probably the most striking feature of the kenesa is its blue-painted octagonal dome-shaped ceiling. The dome of the hall of the kenesa creates the impression of the sky. Its background is covered with stylized petals resembling stars, and in the centre, there is a golden rosette symbolizing the sun.