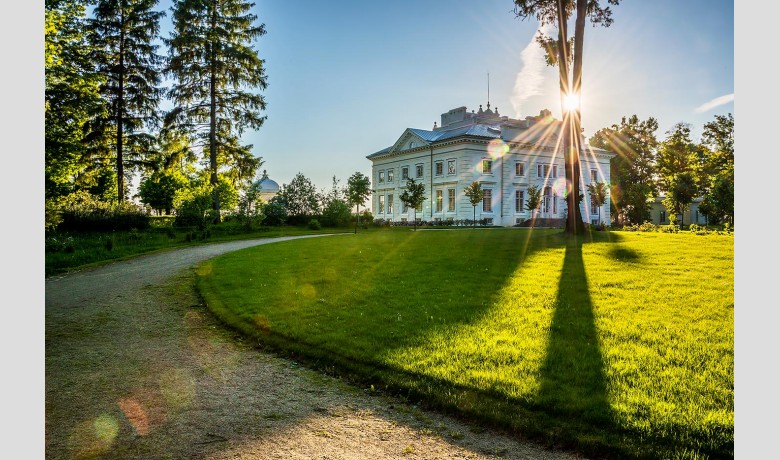 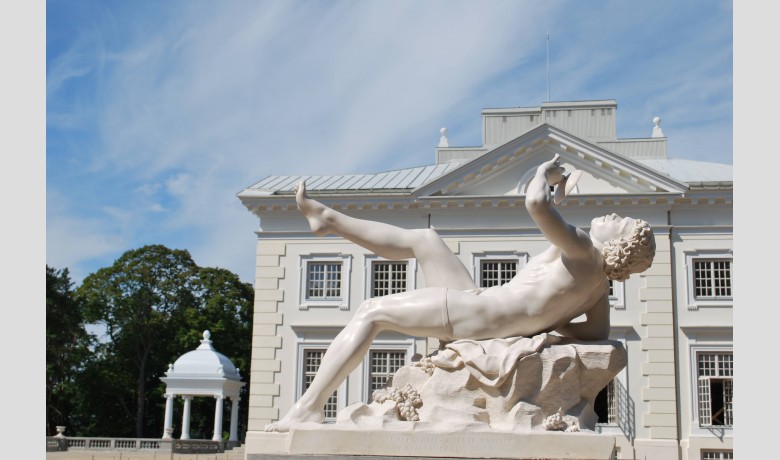 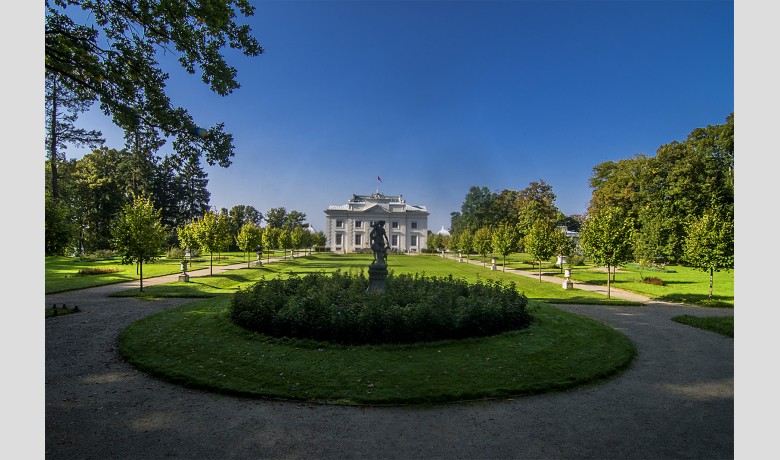 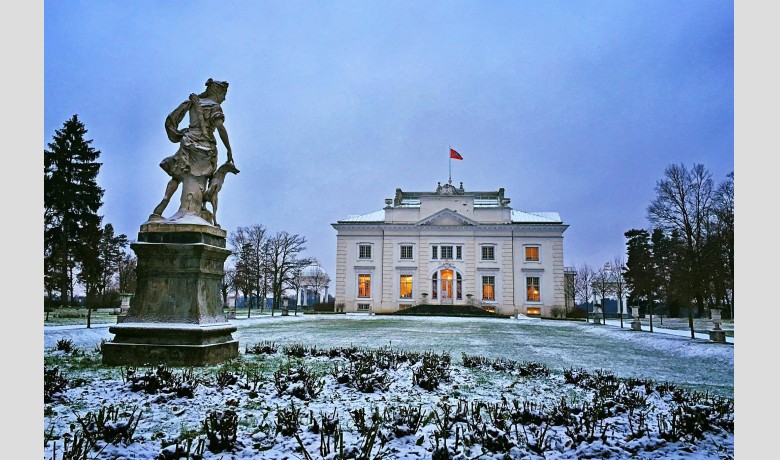 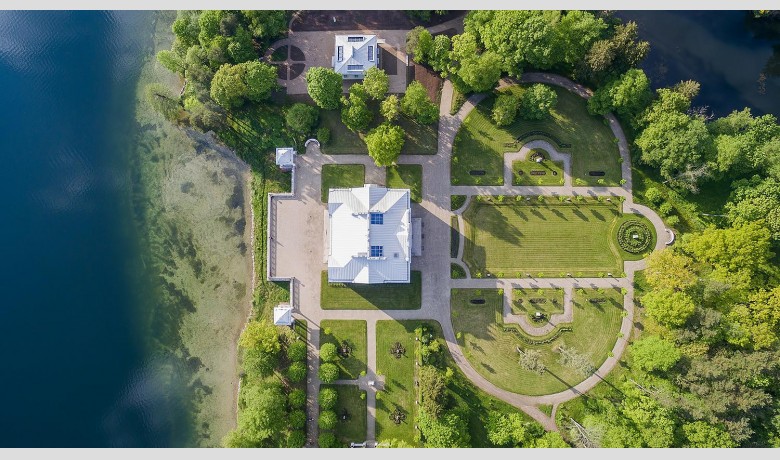 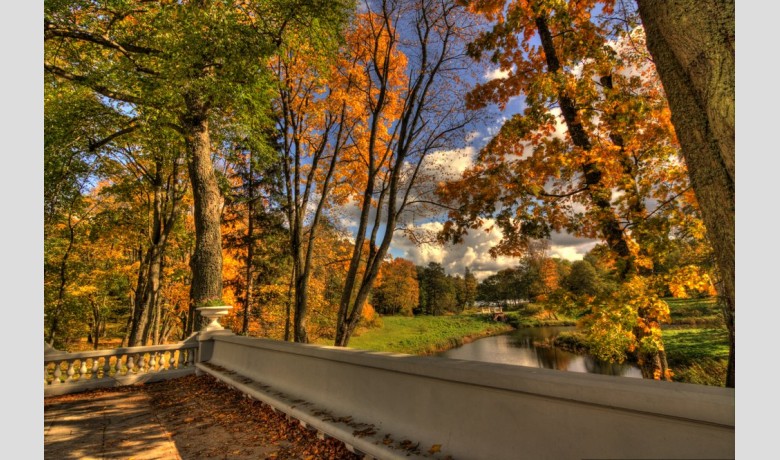 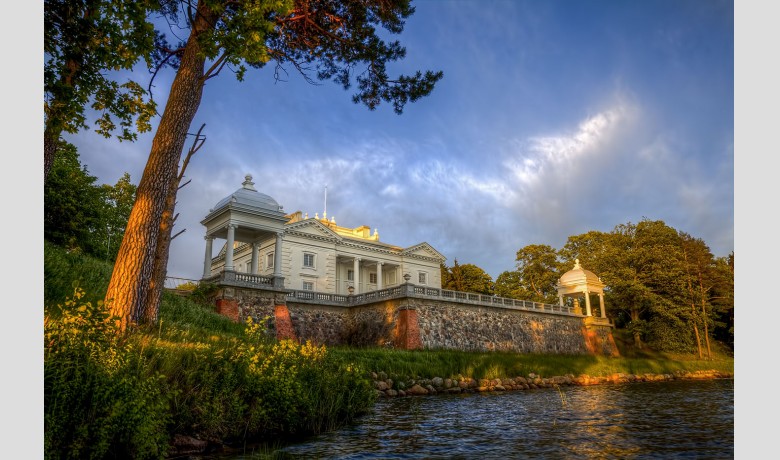 Užutrakis Manor Park stands in the town of Trakai, 2.8 km to the south-east of the Rykantai-Trakai road on the north-eastern shore of Lake Galvė, on a peninsula between lakes Galvė and Skaistis. The Park comprises a main house, park, outbuildings (stable, spirit distillery, smithy, granary, houses for a watchman, ferryman and gardener, barns and so on). Most of the outbuildings stand in the northern part of the Park.

Užutrakis is mentioned in written sources from the fourteenth century when it was called Algirdas Island and was a commercial estate (folwark) owned by the Tatar noblemen Davyd Kalmimovich, the Malshkoviches and Tomas Salavich. In 1723 it was purchased by Stanisław Seliawa. In 1753 the latter’s daughter Gieysztorowa-Narbuttowa sold the manor to a canon of Vilnius Cathedral, Dominyk Karol Karp from whom it was purchased in 1783 by Lauryn Odinec who built a brick Unite church in the park that functioned until 1839. In the early nineteenth century Užutrakis was owned by the Koreiwo family.

After Lithuanian regained control of the Vilnius District in 1939-40 the manor was occupied by troops of the Second Kęstutis Regiment, but on Aug 3 1940 when the Soviet union annexed Lithuania the manor park was nationalised. During World War Two German troops ran the estate an after the war the manor was home to a high-ranking KGB officers’ sanatorium and later it was a rest home and a young pioneers’ camp. Until 1991 it was home to a Soviet tourist enterprise.

The Užutrakis ensemble was formed by Józef Tyszkiewicz and his wife Jadwiga Swiętopułk-Czetwertyńska and it was put into effect at the turn of the nineteenth and twentieth centuries by the Polish architect Józef Huss (1846-1904) and the French landscape gardener Edouard Fran?ois André (1840-1911). Huss designed a neo-renaissance palace and terrace which were built in 1896-1901 and became the compositional centre of the park. The two-storey Main House is a compact rectangle in modest neo-classical style and it has hardly been rebuilt to this day. The solidity of the building is stressed by the high intermediate lower floor and the corners that are stern up to the cornice. The composition of the western fa?ade that faces Lake Galvė is dominated by a deep-set Ionic portico placed within the side wings. The eastern fa?ade is crowned by a triangular pediment above which there is an Attic relief depicting vases and cartouches with the arms of the Tyszkiewiczes (Leliava, or lily) and Swiętopułk-Czetwertyńskis (the Russian Mounted knight). The facades are composed symmetrically and split by palettes, the end of the wings are given pediments with clear modillions and the windows are framed by straight piping.

On the ground floor there are seven symmetrical halls with large oblong windows and in the very middle of the building is a hall with a sky-lit staircase. Modest living rooms used to be on the first floor and had square windows.

The floor-slope roof is crowned by a ventilation shaft adorned with decorative features with a pointed end on which the count’s coat of arms used to hang. The house interior was decorated in Louis XVI style.

The ballustraded terrace is an integral part of the western façade. It is set out on the supporting wall of stone and the corners are made of red brick which gives a military air to the building. The panorama view of Lake Galvė and Trakai Island Castle opens up from this terrace.

Užutrakis Manor was supported by a strong estate of 800 ha with commercial manor farms and villages. The park itself was not small – it covered 80.43 ha. The working part of the manor had 19 brick and wooden outhouses: dwelling houses for then gardener and ferryman, a mares’ stable, smithy, stable, cow byres and so forth. The manor estate still contains the remains of the small Uniate church.