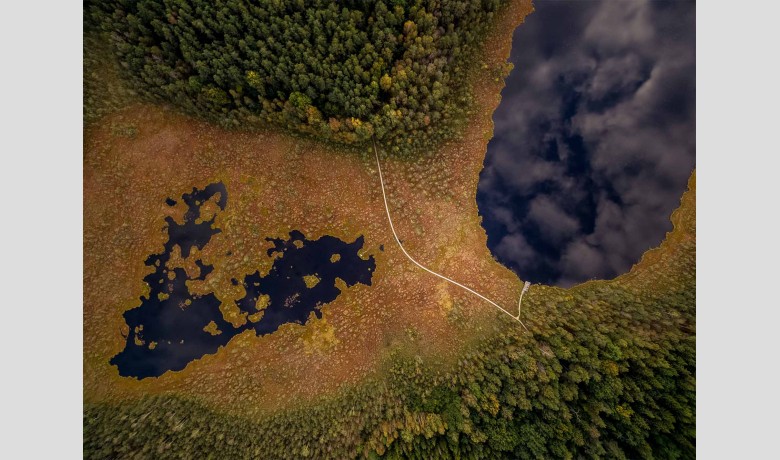 The Varnikai Reserve is located in the southern part of Trakai Historical National Park. It is part of the Trakai Forest Enterprise in Lentvaris Forestry, and spreads across an area of 611 hectares, the majority of which (450 hectares) is covered with forests, while the remaining 207 hectares comprise the Ilgelis bog. In the northern part of the reserve, on the shores of Lake Skaistis, a 200-year-old oak tree forest grows proudly on top of a hill. Next to it, there is a naturally mixed forest with 100-year-old fir and pine trees. About 30–60 years ago, additional fir and pine trees were planted along its edges. Notably, the Varnikai Reserve contains a dedicated area of forest habitat, i.e. an area not affected by human activity, which includes rare or specialised species of plants and trees. In addition, several ‘Natura 2000’ protected sites have also been identified on the territory of the reserve.

Varnikai Ecotourism Path leads visitors through beautiful forests and a meadow that enriches the diversity of the habitats of the reserve opening up a spectacular view over the Ilgelis Bog and lakes. Trakai Forest Enterprise has made this trail visitor friendly and equipped it with gazebos and benches, three scenic viewpoints and ten rest stops located in the most beautiful and hard-to-reach places of the reserve. Visitors can rest and read the information on the local landscape, its features, the Varnikai Reserve and the activities of Trakai Forest Enterprise. Information is available in Lithuanian and English. One of the observation decks provides an opportunity to enjoy neighbouring, yet quite different ecosystems: ancient oak forest located at the top of the hill, mixed forest covering its sides, and a forested bog located at the foot of the hill.

The largest part of the path is a winding non-paved trail. However, a stretch of almost 1.5 km goes through hard-to-reach swamps! In order to ensure the safety of visitors and to provide a unique opportunity to take a stroll in this unique wild nature, a 1-metre wide boardwalk has been installed. Aspen trees were used to construct the boardwalk. This type of wood has long been known for its fantastic moisture resistant qualities.

The reserve can be easily reached by car, bike or on foot. Just follow the signs leading to the Varnikai Ecotourism Path. A car park, children’s’ playground and other guest amenities are located at the start of the route. Symbolically, the trail starts with wooden gates that tourists enter through.

The management of Trakai Historical National Park seeks to preserve the biodiversity of its territory and, at the same time, to create favourable conditions for its expansion. Varnikai Ecotourism Path aims at preserving the old Varnikai forest and bogs together with their unique flora and fauna. The path established by the Trakai Forest Enterprise helps manage the flow of human traffic and to protect nature from uncontrolled visitation.

The Varnikai Botanical-Zoological Reserve is the most studied part of the Trakai Historical National Park. More than 600 different higher plant species were identified here, of which as many as 16 are included in the Lithuanian Red Book.

An impressive 118 different species of moss can be found in the reserve. Four of them are protected throughout the territory of Lithuania. Certain types of mushrooms found here are included in the Red Book.

Scientists have noticed, however, that some types of lichens found here a hundred years ago can no longer be detected today. Actually, the majority of rare lichens indicate the forest’s special value as they point to the key types of forest habitat. This type of endangered vegetation is protected throughout Europe.

There is abundant wildlife in both the forests and swamps of the Varnikai Reserve. Mammals found here include foxes, marten, meles, hare, deer, roe deer and boar. It is no surprise to catch a glimpse of a common European viper on a bright sunny day.

Fifteen varieties of protected insects and beetles are also detected in the Varnikai Reserve. Some of them, including the calosoma inquisitor, the emperor dragonfly and othersare listed in the Red Book. In addition, you could also spot some rare types of butterflies and moths. Common cranes and Eurasian hoopoes living in the reserve are protected throughout the territory of Lithuania. The reserve also has many different types of singing birds such as woodlarks, thrush nightingales, true thrushes and golden orioles. There are plenty of predator birds in the area including various types of owls, hawks and falcons.

The Ilgelis Bog with its 1.5-kilometre-long wooden Ecotourism Path covers a territory of 207 ha in the southern part of the Varnikai Reserve. Four lakes of remnant origin lie within this territory and include the Baluošas, Bevardis, Piliškių and Ilgelis lakes. It is said that these lakes are the remains of a single large lake. Interestingly, all the Varnikai Reserve small lakes are closed: they are dependent on the surrounding bogs, where the water level is 1 metre higher than that of the Bernardinai (Luka) Lake. Thus, the excess water from the Ilgelis Bog flows into the lake.