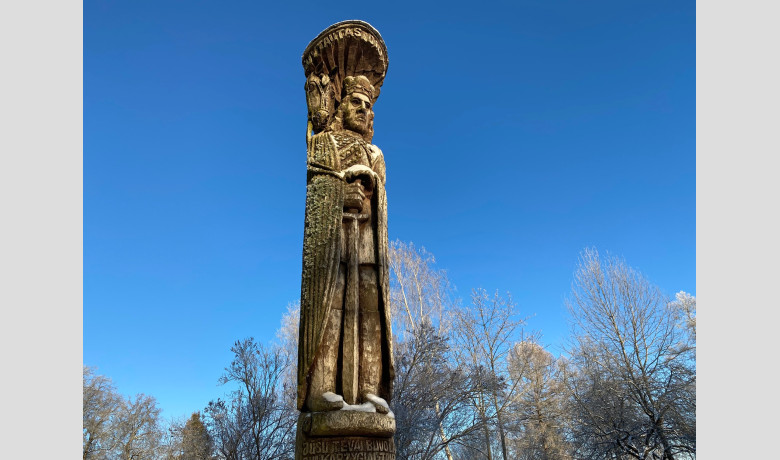 Vytautas the Great was one of the most famous figures in the history of Lithuania. It is with good reason that Vytautas the Great has been glorified to this day – under his rule, Lithuania’s borders stretched from the Baltic Sea to the Black Sea.

On 16 July 1994, an oak monument immortalizing the memory of Vytautas the Great created by folk artist Ipolitas Užkurnis was unveiled on an island in Lake Galvė on the way to Trakai Castle during the convention of the Vytautas Club to mark the anniversary of the Battle of Žalgiris.

Lithuanian Grand Duke Vytautas has a special place in the hearts of Trakai residents and members of the Karaite community. Returning from a successful military campaign in Crimea near the Black Sea, Vytautas brought with him some 400 Karaite families. They settled in the old capital of Lithuania, Trakai. Some of them, the brave warriors, were supposed to help defend his castle from Crusader attacks, and the rest were given land so that they could cultivate it and engage in gardening.

Scholars often wonder what might be the exact reason behind Vytautas’s decision to bring Karaites with him but there is no definite answer to this question. There are two possible hypotheses: some believe that the Karaites were taken as a form of contribution for the war lost, whereas other claim that the Grand Duke was fascinated by the Karaite warriors who demonstrated great bravery while fighting on the side of Khan and brought them with him because he wanted to had them settled in the sparsely populated regions of the country and act as loyal servants and guardians of the country’s western borders. Some fragments of historical records suggest that there was a separate Karaite unit who served exclusively for the Grand Duke. There was a large number of Karaites in the army in later centuries as well. A joint unit of Tatars and Karaites even fought in the Battle of Žalgiris.

Their military talent can probably be in part explained by the fact that military traditions always played an important role in the Karaite society. Even the coat of arms of the Karaites depicts a two-horned spear (senek) and a shield (kalkan). It is noteworthy that the Karaim language has retained a large number of military terms that other Turkic peoples have replaced with loanwords.

It is also interesting to note that the Karaites who settled in Lithuania formed a separate community called gymat (džymat). The legal status of the community and its individual members was governed by the privileges granted to them by the rulers.

The first deed that established the legal status of the Karaites in Lithuania was the 1441 privilege of Grand Duke Kazimieras Jogailaitis which granted the Karaites of Trakai the same Magdeburg right that had already been granted to Vilnius, Trakai and Kaunas. They were given the right of self-government to be exercised by themselves or the wójt elected from amongst the members of the Karaite community. The Karaites were only subordinate to their wójt, and the latter was accountable to the ruler. These rights were later revised and expanded by subsequent Lithuanian rulers. Thus, the Karaites felt they were well supported and protected.

Special respect that the Karaites have had for Vytautas is reflected in Karaite art which depicts him in a poetic light and treats him as a significant figure. The Karaites refer to Vytautas as “Vatat Bijumi” which means “the king who destroys his enemies”.

The fables portray him as a wise, brave, noble-minded and powerful ruler. Lithuanian Grand Duke Vytautas always had good relationship with the Karaites and many Karaites even have his portrait on their walls. Not only Vytautas but also his horse, to whom miraculous powers have been attributed, are surrounded by a sacred halo in the Karaite stories.

Legend of the Grand Duke’s miraculous horse Legend has it that the Karaites’ street was once in danger of being wiped out by lake flooding. Gripped by fear, the Karaite women climbed into a boat and set off to ask the Grand Duke Vytautas for help because their men were out fighting in the battle, and they were all alone and powerless against the elements. After hearing out the women, Vytautas promised to help them. Shortly, his horse headed to the Karaites’ street and drank all the flood water, protecting the street from the flood. People were in awe and tears of joy streamed down their faces. After returning home, the women praised and glorified the grand duke and his miraculous horse. The horse, overfilled with water like a giant mountain, slowly trotted out of town towards the Karaite Fields, the bridge almost collapsing from his weight. At the place where the horse stopped to rest, Puvus Lake (Čirik giol‘) emerged. To this day it stands as a reminder of the miraculous horse.